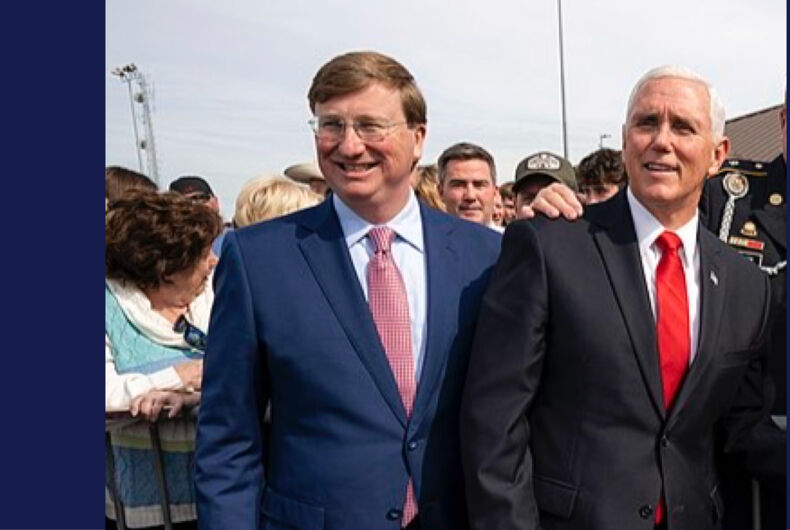 Mississippi Governor Tate Reeves (R) made a lengthy statement on Facebook and Twitter, complaining in response to Joe Biden’s executive order that explicitly protects people from discrimination based on gender identity and sexual orientation. “All persons should receive equal treatment under the law, no matter their gender identity or sexual orientation,” the executive order states in the introduction.

Reeves, like other conservatives, have tried to misconstrue the order into somehow harmful to non-LGBTQ people. He claims that this harms his daughters, and is part of an effort by “politicians [who] are pushing children into transgenderism.”

“If there’s one thing that we are passionate about in the Reeves family, it’s my daughters’ sports,” Gov. Reeves wrote on February 4. “I know that the lessons learned through team sports have led to so many successful lives and careers for women and have truly helped provide a more equal opportunity for success in our world.”

But apparently, according to Reeves, those lessons are only for cisgender children. It’s “wrong” for trans or gender non-conforming children to get the same benefits from sports.

“I am so disappointed over President Biden’s actions to force young girls like them to compete with biological males for access to athletics,” he said, alleging that “it will limit opportunity for so many competitors like my daughters. It is bad policy and it is wrong for America.”

Nothing in the order tries to “force” girls to play with men, or even directs any changes to school athletics. The order simply tells the heads of all executive agencies to “review all existing orders, regulations, guidance documents, policies, programs, or other agency actions” in order to ensure that they are interpreting bans on sex discrimination in federal law to also ban discrimination “prohibit discrimination on the basis of gender identity or sexual orientation.”

That would include the Department of Education, which oversees public-funded schools, and would direct them not to discriminate against trans children by preventing them from playing on an athletics team that aligns with their gender identity.

“I just don’t understand why politicians are pushing children into transgenderism in the first place,” Reeves continues, not explicitly stating who is making such a “push,” or how. “I certainly don’t understand why the President chose to make it a priority in his first days.”

He concludes, “my heart breaks for the young women across America who will lose in this radical social experiment.”

My girls practice tirelessly. They work hard. They’ve learned how to win and, yes, they’ve learned what it feels like to be on the wrong end of the final score. It’s true bonding—my happiest and proudest Dad moments.

I don’t understand why politicians are pushing children into transgenderism in the first place. I certainly don’t understand why the President chose to make it a priority. And my heart breaks for the young women across America who will lose in this radical social experiment.

Biden’s executive order implements what the Supreme Court already deemed the law of the land with their 2020 Bostock v. Clayton Co. decision on job discrimination, across all sectors of the federal government. In Bostock, the majority of the court found that the ban on job discrimination “because of sex” in Title VII of the Civil Rights Act of 1964 also bans discrimination against LGBTQ people, since anti-LGBTQ discrimination is inherently based on sex.

Biden’s order extends the same reasoning the Supreme Court made regarding job discrimination and applies it to other federal anti-discrimination laws, like Title IX of the Education Amendments of 1972, the Fair Housing Act, and section 412 of the Immigration and Nationality Act.

Despite Gov. Reeves’ objections, President Biden’s order protecting LGBTQ people from discrimination has proven to be his most popular yet and is supported by a vast majority of the country.

A recent Ipsos poll found that 83% of the country approve of Biden’s executive order to interpret federal bans on discrimination “because of sex” as already banning discrimination against LGBTQ people. Even 64% of self-identified Republicans supported the executive order. Unsurprisingly, it seems that only anti-LGBTQ activists – both conservative Christians and anti-transgender “feminist” activists (TERFs) – are hopping mad.

Reeves won election to the governorship in November 2019. Reeves previously served as Mississippi’s Lieutenant Governor from 2012 to 2020, and the state treasurer from 2004 to 2012. The 46-year-old is a graduate of Millsaps College, where he was a member of a fraternity that proudly donned blackface and Confederate flags when they weren’t clashing with Black students or throwing around racial epithets.

If there’s one thing that we are passionate about in the Reeves family, it’s my daughters’ sports. I know that the…

A bill is currently under consideration in the conservative-controlled Mississippi legislature, attempting to prevent anyone from receiving transition-related healthcare if they are under the age of 21. That would restrict trans people from accessing potentially life-altering treatment, potentially longer than they are restricted from voting, consuming alcohol, or marriage.

Trans youth would not be able to seek gender-affirming care, and medical professionals could be punished for even bringing up their gender identity without the consult and express permission of a trans youth’s parents or guardians. It would also make it legally required for medical professionals to out trans youth if they try to receive treatment related to their gender identity, or face civil punishment.

There is simply no data to back up these concerns.

Proponents of the bill to get trans kids out of school sports agree that this issue has not occurred in Mississippi. https://t.co/MYlPAoWjHd

Mississippi has too many problems that exist to exhaust time and effort on issues that are purely hypothetical.pic.twitter.com/g0VCIVuQV4 https://t.co/E3dKjT72hx

This thread by the #Mississippi governor about transgender people is simply unacceptable in any year but especially in 2021. 6 days after a transgender woman was murdered in Jackson, MS. Shame on you .@tatereeves.

This is a really long way to tell us you're transphobic, @tatereeves. 🙄 https://t.co/MIABb2FQKV