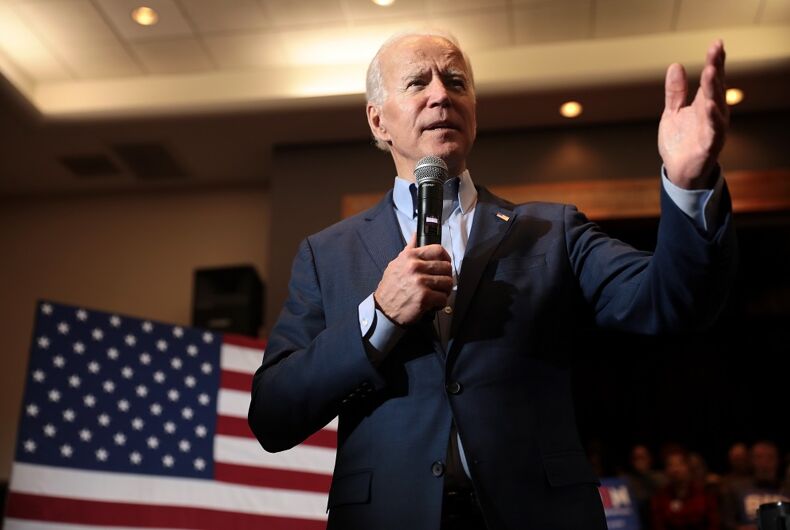 If you only have a job for a few weeks, do you put it on your resume?

That’s the issue now facing a bunch of Trump loyalists. In the waning days of his administration, President Trump loaded up a bunch of government positions with his acolytes in a final attempt to sabotage the incoming Biden administration. Now, Joe Biden is cleaning house, throwing out some of the worst appointees before they’ve even had a chance to revise their CV.

In perhaps the most consequential move, Biden removed Trump’s appointees at Voice of America, the U.S. government’s official news agency. Despite being an arm of the government, VOA functions as a legitimate news organization, adhering to high journalistic standards.

That is, until Trump came along and appointed alt-right figures to the agency. Chief among them was Robert Reilly, an anti-LGBTQ extremist. Reilly is the author of a book called Making Gay Okay: How Rationalizing Homosexual Behavior is Changing Everything.

“I really implore people across the political spectrum to read some of the hate-filled and dehumanizing things Robert Reilly has written about gay people,” Grant Turner, the former acting CEO of the U.S. Agency for Global Media — who is gay — told NPR at the time of Reilly’s appointment last December. “It’s mean-spirited, sexually explicit, and just plain weird.”

Reilly was canned on Biden’s first day in office. He was replaced by Yolanda Lopez, a news editor whom Reilly demoted after one of her reporters shouted a question at then-Secretary of State Mike Pompeo.

Most of the positions that Trump doled out at the last minute were largely ceremonial. Chief among these were a slew of appointments to Pentagon advisory boards. Among the luminaries that Trump named to Pentagon positions were two of his former campaign officials, Corey Lewandowski and David Bossie.

Bossie is a long-time right-wing operative, with an equally long-time anti-LGBTQ record. Bossie has proclaimed that being LGBTQ is “fundamentally wrong” and said of then-President Obama’s support for marriage equality, “add it to the list of atrocities.”

Lewandowski doesn’t have the same level of animosity to LGBTQ people. Instead, he is just obnoxiously aggressive, often towards women. He was accused of sexual harassment by singer and Trump supporter Joy Villa (Lewandowski maintains his innocence). He was famously fired from the Trump campaign in 2016 after a series of controversies that included being charged with battery for grabbing a female Breitbart reporter. (Those charges were dropped.)

Biden also disbanded the 1776 commission, a group of group of right-wing propagandists Trump appointed to rewrite history. The commission’s one and only report was derided by historians as “a hack job” that downplayed the legacy of slavery and equated progressives with Italian fascist Benito Mussolini.

The commission was chaired by Larry Arnn, president of Hillsdale College, who once described the minority students on his campus as “the dark ones.” Arnn has also bemoaned marriage equality and the repeal of sodomy laws.

Perhaps the most prominent anti-LGBTQ advocate to lose a ceremonial position was Roger Severino. While at the Department of Health and Human Services, Severino spearheaded the creation of a rule that allowed health care providers to discriminate against transgender people on religious grounds. The harmful move was in line with Severino’s lifelong campaign against LGBTQ rights.

Four days before he left office, Trump appointed Severino to the Council of the Administrative Conference of the United States (ACUS), a body that provides advice on administrative efficiency. Severino is suing the government, claiming that he can’t be fired.

Some of Trump’s appointees will no doubt linger on in positions that look good on paper, and have no policy impact — but the fact that Biden moved so quickly to rid government of some of the worst of the last-minute appointees is a clear signal to those that remain, and a note of support to the LGBTQ voters who put Biden in office.

Trans people who want to serve can “walk in and join” the military. Right now.