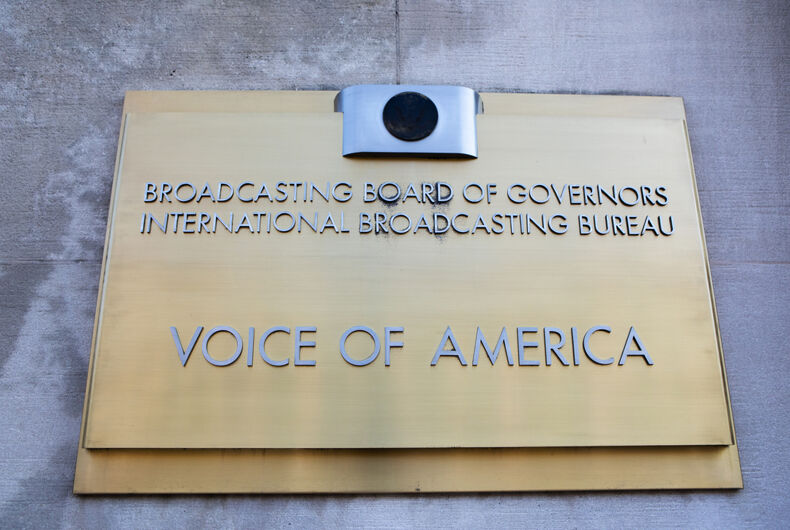 The Voice of America has long been a bastion of serious journalism. As the U.S. government’s official outlet for news, the organization has long modeled the values of democracy through objective reporting. The VOA demonstrates to the world what a free press and honest news look like.

Needless to say, that’s anathema to Trump and his hard-right followers. In one last attempt to corrupt the agency before Trump leaves office, an anti-LGBTQ extremist has been named to head the agency.

Related: Is there a President Ivanka in our future? Trump’s daughter is his heir apparent.

Robert Reilly is the author of Making Gay Okay: How Rationalizing Homosexual Behavior is Changing Everything. The book claims that “the debate over homosexuality is really about the nature of reality itself” and says accepting LGBTQ rights means “we all must say that the bad is good.”

Reilly doesn’t just hate LGBTQ people. He hates Muslims too. He’s also the author of The Closing of the Muslim Mind: How Intellectual Suicide Created the Modern Islamist Crisis, in which he rants about “the spiritual pathology of Islamism.”

Now Reilly will head up a government agency devoted to fair coverage. While most Americans aren’t aware of VOA’s reporting, it has a well-earned reputation for honesty and balance. That includes LGBTQ issues. VOA has been vigilant in covering attacks on LGBTQ rights around the globe as human rights abuses.

That makes present and past VOA employees worried that Reilly will try to turn the VOA into a religious right outlet.

“Imagine how Reilly’s views will be greeted by governments in countries that ostracize or even murder gays,” Amanda Bennett, Reilly’s predecessor in the job, wrote in the Washington Post. Bennett, who was forced out of her job last June, said she was taking the unprecedented step of criticizing her successor because he is “dangerous.”

Reilly’s appointment is a parting gift from Michael Pack, the right-wing documentary maker who heads the US Agency for Global for Media, which oversees the VOA. Pack himself has an anti-LGBTQ background; he is on the advisory board of the Liberty Counsel, a designated hate group that is planning to petition the Supreme Court to overturn its marriage equality decision.

Pack has been disrupting the agency since his Senate confirmation last June, pushing out journalists considered insufficiently loyal to Trump and his right-wing world view. He has slurred the agency in interviews with right-wing outlets as “a great place to put a foreign spy.”

What Pack and presumably Reilly have in mind for VOA is to turn it into a propaganda machine. Pack and his appointees have been meddling in editorial decisions, violating a basic journalism tenet, trying to tilt coverage in a way that comports with right-wing viewpoints.

No doubt, Reilly would love to turn the VOA into a megaphone for his anti-LGBTQ beliefs. If the incoming Biden administration doesn’t act quickly upon assuming the White House, he may get his wish. (Pack, on the other hand, will leave immediately.)

Under a recent Supreme Court ruling, the new administration can remove appointees to positions like Reilly’s. However, legislation in its final stages, the head of the VOA can only be removed upon recommendation of a bipartisan committee. Once that legislation is in place, Reilly will be able to play out the clock on the rest of his three-year term.

Why won’t this couple’s health insurance give them the same benefits as a straight couple?