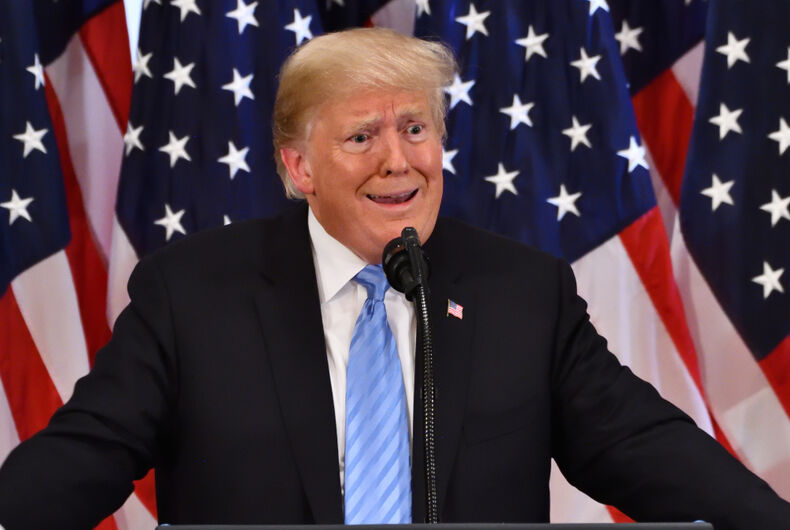 Even as he heads out the door, President Donald Trump continues to break the norms. The insurrection that he incited is the biggest example, but there’s another that has garnered far less attention: his appointments of dozens of his loyalists to government committees.

The appointments, which includes the usual array of anti-LGBTQ activists, promises to be a headache for the incoming Biden administration. Moreover, the appointments sanctify fringe figures by giving them prestigious positions that no normal administration would confer upon them.

Among the characters that Trump has rewarded for their sycophancy:

Marcus Bachmann — Marcus is the husband of Michelle Bachmann, the viciously anti-LGTBQ right-wing former Congresswoman, but he’s offensive in his own right.

He’s an unrepentant purveyor of conversion therapy. Marcus, who is not a licensed clinical psychologist, has in the past been caught telling patients that he can make them straight. Trump named him to a spot on the Committee for People with Intellectual Disabilities.

David Beattie — Beattie was named to the Commission for the Preservation of America’s Heritage Abroad committee. The commission has the responsibility of overseeing Holocaust sites, which makes Beattie the worst choice for it possible. He was already fired from a White House job when it was revealed that he participated in a conference with white nationalists.

The Anti-Defamation League has demanded that his appointment be rescinded, to no avail.

Charlie Kirk — The founder of the conservative think tank Turning Point USA, Kirk has taken glory in his reputation as a provocateur, constantly attacking perceived academic bias and promoting a far-right agenda.

While Kirk says that he’s open to gay people in the conservative movement, he’s also attacked transgender people and described opposition to religious liberty as “fascism.”

Larry Arnn — Arnn is the president of Hillsdale College, which is decidedly right-wing in its educational views. Arnn was appointed to the 1776 Commission, the group Trump formed to promote “patriotic education” and counter the broad acceptance of academic critical race theory.

Arnn has previously bemoaned marriage equality and the “overturning of judicial activism of hundreds of anti-sodomy laws.”

David Bossie — Bossie, who was an official in Trump’s 2016 campaign, has been rewarded with a spot on the Pentagon Defense Business Board, an advisory group.

Bossie has a long anti-LGBTQ history, including opposing the repeal of “Don’t Ask, Don’t Tell” and bestowing an award on Duck Dynasty’s Phil Robertson for his anti-gay comments.

Pam Bondi — Bondi, who once gave Trump a pass on his fraudulent Trump University and got a $25,000 campaign contribution shortly thereafter, got one of the most plum spots. She was selected on the board of the Kennedy Center.

The former Florida Attorney General fought marriage equality tooth and nail after it became the law of the land.

There are plenty of others, including conspiracy theorist Douglas Macgregor and Russell Vought, director of the Office of Management of Budget, who oversaw the end of diversity training for federal employees.

Most of the positions are ceremonial and won’t have much impact on the Biden administration’s policy goals. The longest term damage will come from Trump’s judicial appointees, who will be attacking LGBTQ rights for decades to come.

But the appointments are one last reminder that Trump emboldened and empowered bigotry throughout his tenure. On his way out the door, he just can’t stop himself from keeping it up in every way he can.