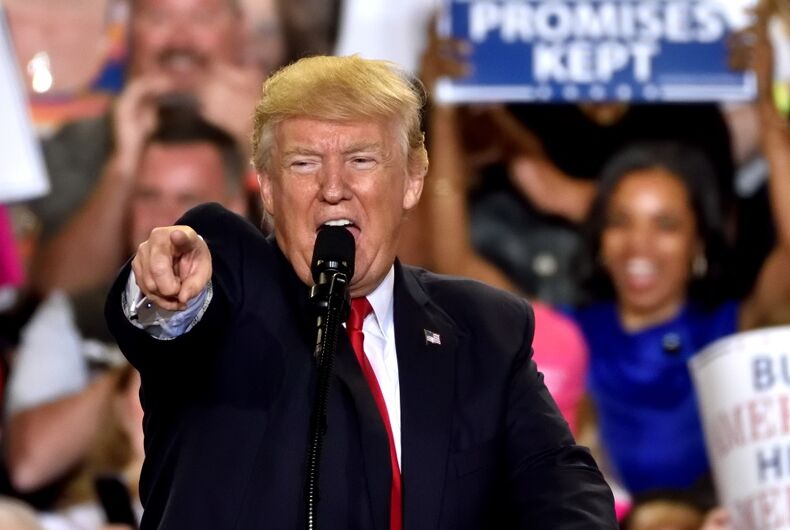 The move was met with disbelief, even coming from a president notorious for his attacks on civil rights, but Trump does have supporters: evangelical activists, racists, and anti-LGBTQ hate group leaders.

Russell Vought, director of the Office of Management and Budget, sent a two-page memo to agencies decrying the “millions of taxpayer dollars” being spent on the programs. He ordered administrators to identify any training on “white privilege” that suggests the United States “is an inherently racist or evil country” or “that any race or ethnicity is inherently racist or evil.”

Agencies should “cancel any such contracts and/or to divert Federal dollars away from these unAmerican propaganda training sessions,” according to the memo, claiming the courses teach that “virtually all White people contribute to racism.”

The trainings “not only run counter to the fundamental beliefs for which our Nation has stood since its inception, but they also engender division and resentment within the Federal workforce,” Vought wrote. “We cannot accept our employees receiving training that seeks to undercut our core values as Americans and drive division within our workforce.”

While Trump took to Twitter to defend his latest attack on Black Americans and urging supporters to report any material they find to supportive of Black civil rights.

“This is a sickness that cannot be allowed to continue,” Trump tweeted. “Please report any sightings so we can quickly extinguish!”

It’s unclear exactly what materials are covered by the memo, and several political commentators saw it more as a political move meant to shore up support from evangelical Christians and racists.

And anti-LGBTQ hate group leaders have lined up to praise the move against the “woke” agenda.

Tony Perkins – head of the Family Research Council and a former Louisiana state legislator with ties to the Ku Klux Klan – hailed the move, saying Trump “took another step toward fulfilling his promise to ‘Drain the Swamp.'”

“Instead of celebrating the diversity of race, ethnicity, and religion in America, the doctrine seeks to paint some as evil oppressors and others as innocent oppressed,” he continued in an email to supporters.

“Americans face a critical juncture in the 2020 election. Openly Marxist forces in our schools, our media, our government, and our streets, threaten to destroy the liberties we prize. While most career politicians apologize and flip-flop at the first sign of conflict, President Trump is one of only a few public leaders who has demonstrated the courage to stand up to them.”

Scott Lively, a former Republican political candidate and anti-LGBTQ activist who was sued for crimes against humanity, blamed gay people for the rise of “Critical Race Theory” and the downfall of Western civilization.

The philosophy’s “first use as a tool of social engineering in the civil rights era of post-World War II America was by the homosexuals, the original foot-soldiers of the revolution.”

Trump Orders Purge of ‘Critical Race Theory‘ from Federal Agencies https://t.co/ygXcTXRHsQ via @BreitbartNews This is a sickness that cannot be allowed to continue. Please report any sightings so we can quickly extinguish!