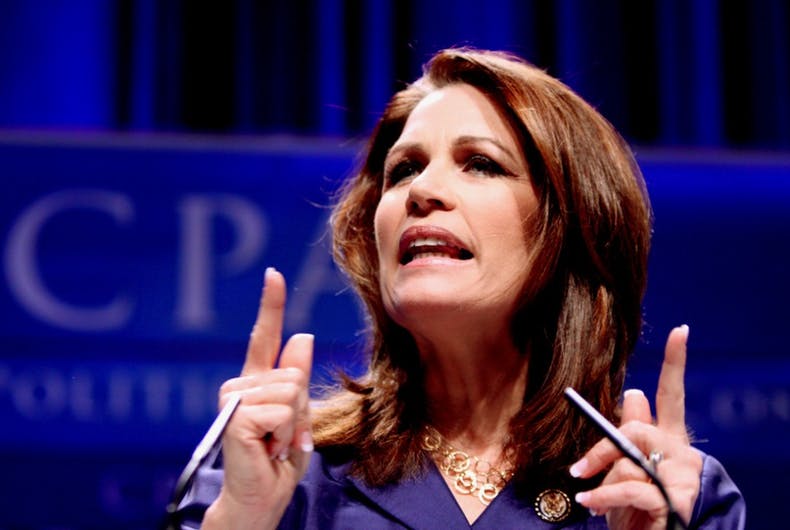 Former Rep. Michele Bachmann (R-MN) is now claiming that “Satan” stole her vote in last November’s elections and is trying to end American democracy in 2020 because it’s the 400th anniversary of the founding of the Plymouth colony in 1620.

Most people would look at how Biden got more than 80 million votes and think that America is, in fact, on board with Biden being president, but not Michele Bachmann.

The Trump campaign’s voter fraud lawsuits have gone nowhere and states have recounted votes multiple times and Biden still won what even the Trump administration’s own Cybersecurity and Infrastructure Security Agency called “the most secure in American history.”

But Bachmann’s conspiracy theory goes even deeper and straight to Satan.

“When the clock was striking 11:59 and 59 seconds on the 400th anniversary of this gift of God to the world,” Bachmann said, “this idea, of voting for the people and the laws that you live under, that we take for granted? That’s exactly when Satan was snatching away from America rule by the consent of the governed.”

Bachmann said Satan was “stealing from us our right to vote. I am highly offended, insulted, angry, and I’m not going to stand for the fact that my vote was stolen!”

Bachmann was referring to November 9, 2020 – the day before the presidential election and the 400th anniversary of when the Mayflower saw the land that would become the Plymouth colony. The far-right has argued that the Plymouth colony – not Jamestown – is “the real beginning of America” as a way to keep schools from teaching about the importance of slavery in U.S. history and its lasting impact.

The fact that the dates almost line up – the Mayflower Compact was actually signed on November 11 while the election was held on November 10 – is apparently proof of a conspiracy between Satan and the Democratic party.