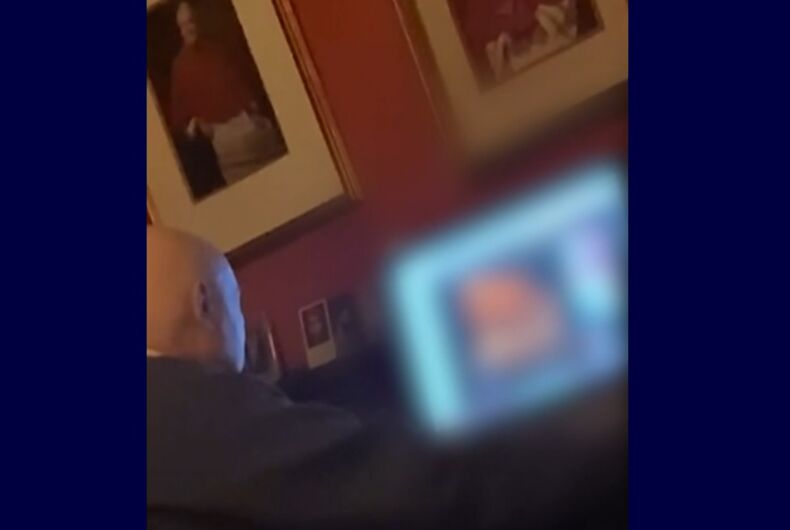 Ashley Gonzalez was hired this past month as an overnight security guard at the St. Michael the Archangel Church in New York City and she said that she caught Father Rutler watching the video and recorded him on her phone on November 4, her second day on the job.

The National Catholic Reporter reported that it obtained the 18 seconds of cell phone footage that shows the back of a bald man watching two men engaged in oral sex on a computer in a room with religious icons on the wall. The 75-year-old Rutler is bald but his identity cannot be confirmed in the video.

Gonzalez, 22, said that Rutler “aggressively threw himself on me and grabbed me sexually, aggressively, and I was fighting him off of me.” She said he attacked her “like a monster.”

She sent a series of texts to her mother where she wrote that she believed she would be sexually assaulted by the priest, and she later hired a private investigator who filed a police report on her behalf, alleging that Rutler closed the door after he was caught to keep Gonzalez from escaping and then grabbed her.

“He looked at me with a smile, looked away, and he put his hand inside his pants, and he was playing with himself,” she said. “He aggressively threw himself on me and grabbed me sexually, aggressively, and I was fighting him off of me.”

She said she turned over her cellphone footage to police and sent it to the Archdiocese of New York and to the Vatican.

In a letter to parishioners, Rutler denied the accusations, which he said were “incoherent and painful to my reputation and inconsistent with how I have conducted myself in fifty years of ministerial service without any accusation of misbehavior.”

Rutler, a Trump supporter, has a history of anti-LGBTQ statements. In 1990, he wrote that the priesthood should be reserved for men because “God made males and females equal but different” and “any contradiction of that is a homosexual vision of culture.”

He also wrote that “the abortionists and the sodomites” are “allied” because they both want to kill people: “When homosexualists are infecting each other lethally, and abortionists are killing unborn children, they are united in a commitment to death and to self-destruction.”

“Once you start telling people they can have safe sex, you are telling them that they can live a fantasy and pretend it’s real,” he wrote, adding that “the only real sex” is sex for “the procreation of life.”

More recently, Rutler said that “the Vatican has become a theological Chernobyl” because of Pope Francis’s more liberal views on a number of issues, including tolerance of LGBTQ people and the death penalty.

Gonzalez said that her trust in the church is shaken since the incident.

“I was raised to respect them and look up to them, and now I’m disgusted,” she said.

Michelle Bachmann claims her vote was stolen by Satan