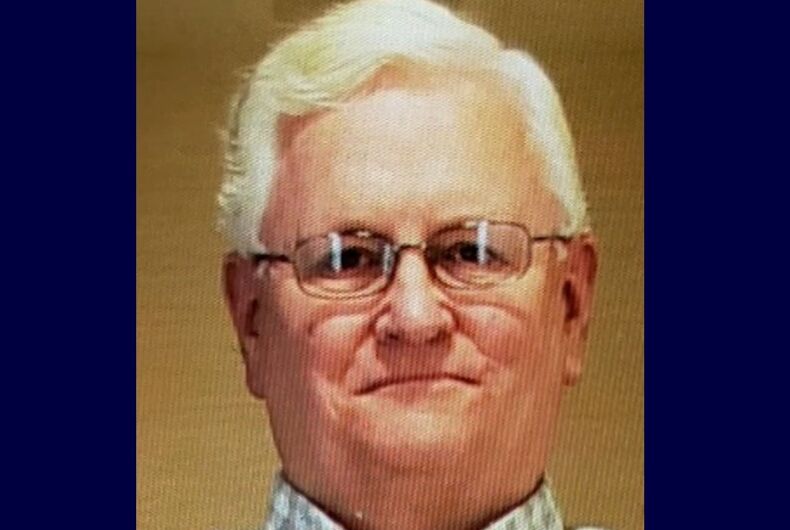 “How would you like to be spoiled by your grandpa?” the 65-year-old pastor at the St. Pancras Roman Catholic Church in Queens, New York is accused of asking a 15-year-old boy in a text message.

Related: Antigay pastor is ‘a danger to every child in this community’ as ‘many more’ victims possible

“The allegations against Francis Hughes are chilling and frightening to any parent,” said Acting U.S. Attorney Audrey Strauss in a statement.

According to court documents filed in federal court, the victim told investigators that he said he was 15-years-old when he met Hughes on Grindr in 2019, but that didn’t deter the priest. Hughes also admitted that he knew the victim was underage, according to the document.

The two texted each other off Grindr, and the FBI recovered texts and nude pictures they sent each other from the victim’s phone.

“And how’s school? You doing ok?” Hughes asked in a text message on February 16, 2020. They exchanged pictures of their genitalia and Hughes asked for more explicit pictures.

“How would you like to be spoiled by your grandpa?” Hughes asked. The two discussed Hughes sending money to the victim and the pastor even asked how the victim would hide it from his parents.

“That makes me your sugar daddy,” he asked. “And you’re the sugar baby, lol.”

Hughes stopped responding to the victim later that night and it’s not apparent from the text messages that they met up. But when he was interviewed by the FBI, Hughes admitted to having sex with another minor at a high school in Queens, New York, and he said he has attempted to meet other minors for sex.

“He always used to be like a little over-friendly, and he used to be a little touchy sometimes,” a former student of Hughes at a Catholic middle school told ABC 7. “That’s why I always thought there was something off about him.”

The Diocese of Brooklyn said that Hughes has been removed from his job.

Hughes is facing one count of receipt and distribution of child pornography and could get up to 20 years in prison if found guilty. Investigators are still looking for other victims.

“We expect adults, especially those in positions of trust like Francis Hughes, to protect our children, not victimize them,” said FBI Assistant Director William Sweeney Jr. “Sadly, these allegations demonstrate there are still predators out there who abuse this trust.”

Even as Catholic priests continue to be caught victimizing minors, the Church still opposes LGBTQ relationships and considers being gay or bisexual a tendency towards sin. The Church’s current position is that gay Catholics should remain celibate, much like priests.