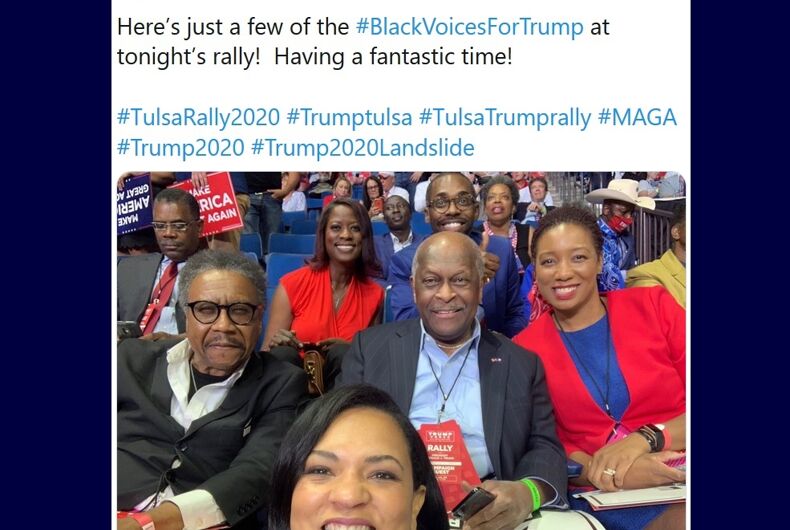 Herman Cain tweeted from a Trump rally on June 20, 2020, without a mask.Photo: Screenshot/Twitter

Herman Cain, a former CEO and Republican presidential candidate, has passed away after a month-long battle with coronavirus.

The chair of “Black Voices for Trump,” Cain attended a June 20 rally for Donald Trump in Tulsa, Oklahoma, where he even tweeted a photo of himself without a mask, surrounded by other people not wearing masks. Public health officials had warned people that the large, mask-less gathering could put people’s lives at risk by spreading the virus.

Related: Dan Savage wants Herman Cain to prove being gay is a choice

Cain was hospitalized 11 days later and tested positive for coronavirus. His staff insisted that there is no way to know where he caught the virus.

After being hospitalized, Cain tweeted support for South Dakota Gov. Kristi Noem (R), who said she would not require people to wear masks at another Trump event held in her state.

“Masks will not be mandatory for the event, which will be attended by President Trump,” Cain tweeted. “PEOPLE ARE FED UP!”

He stayed in the hospital until he passed away today due to complications from the COVID-19 virus.

Cain, the former CEO of Godfather’s Pizza, ran in the 2012 Republican presidential primary, where he opposed LGBTQ rights.

Cain was accused by multiple women of sexual harassment, including a 13-year extramarital affair. He denied the accusations.

He ultimately suspended his campaign in December 2011, before any states held their primary elections and Mitt Romney went on to win the GOP nomination and lose the general election to Barack Obama.

During the campaign, he supported the federal ban on marriage equality – the Defense of Marriage Act (DOMA) – because “marriage should be protected at the federal level.”

He said that homosexuality was a “choice” and, when called out by The View‘s Joy Behar, he said, “You show me the science that says that it’s not [a choice].”

“Right now it’s my opinion against the opinion of others who feel differently. That’s just a difference of opinion.”

After he suspended his campaign, he remained involved in politics, contributing to Fox News and writing a column for the far-right website Newsmax.

“Herman Cain embodied the American Dream and represented the very best of the American spirit,” the White House said in a statement. “Our hearts grieve for his loved ones, and they will remain in our prayers at this time. We will never forget his legacy of grace, patriotism, and faith.”