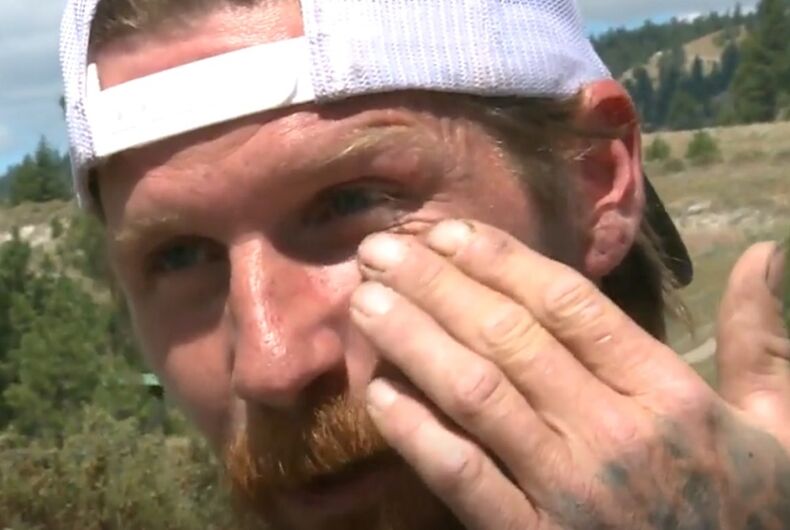 A 43-year-old gay man says he was surrounded by a group of seven people and beaten while camping with his dog, but local police said they aren’t going to do anything about it since there were no “independent witnesses.”

Shane Daum said that he was camping with his dog about a month ago when the horrifying attack occurred.

Daum said that his campsite was surrounded by the group of people who recognized him from the grocery store where he would go with his ex-boyfriend.

“They were calling me a fa***t, a pedophile,” Daum told Global News, saying that his ex “looks way younger” than he actually is.

He said that he tried to walk away from the group and he looked for his dog, but the people were restraining the dog.

“That’s when I had my head turned and one guy hit me. I lost consciousness.”

He said that the attackers beat him while he was on the ground and that he slipped in and out of consciousness “four or five times.”

An ambulance was called by a neighboring camper at the Crump Recreation Site near Summerland, British Columbia. Daum was taken to the hospital, where he spent the night.

He was diagnosed with a concussion, but he said that he’s still suffering a month later from “panic attacks and severe anxiety.”

“It’s gotten to the point where my doctor has put me on Ativan,” he said, using a brand name for Lorazepam, a medication for anxiety disorders.

Cpl. James Grandy with the Penticton Royal Canadian Mounted Police confirmed that “Mr. Daum was assaulted,” but he said that there was “insufficient evidence to arrest any particular person, which included no independent witnesses to identify any particular accused at the time.”

“I just feel let down by the whole system,” said Daum. “I’m hurt beyond all meaning. It’s hard enough coming out and trying to get accepted.”

He said that he is looking for a lawyer and considering a civil suit against the alleged attackers.