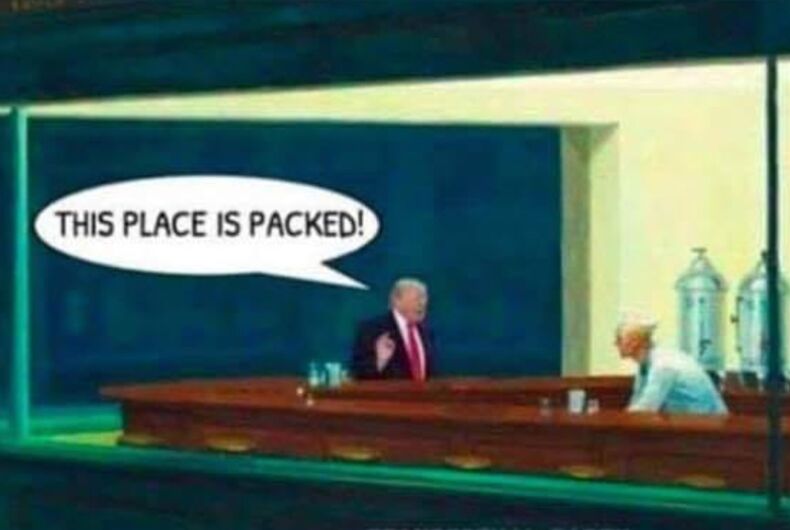 Donald Trump’s big comeback rally – a large indoor rally held during a pandemic – in Tulsa, Oklahoma was a major disaster when the white supremacists and evangelicals he’s courted failed to show. After touting that “a million” people had requested tickets, the campaign was humiliated when only 6200 people showed up, leaving the stadium two-thirds empty and an outside “overflow” section abandoned.

Social media being what it is, memes and snark have further embarrassed the notoriously thin-skinned president.

Related: The most powerful form of protest is voting

While Trump’s campaign blamed “fake media” coverage of the pandemic and his tweets that encouraged racist violence, K-Pop fans and Tik-Tok users claimed credit for the inflated interest in tickets. Thousands had signed up to attend with no intent to show up, leaving the campaign flat-footed after the throng they expected failed to materialize.

Adding to the unintended humor, during his speech, Trump responded to chatter about his health after he spoke at a graduation ceremony at West Point and had to use both hands to hold a glass of water. The president also said he walked off the stage slowly because the ramp was “brutal” since he was wearing leather soled shoes.

Trump reportedly threw several tantrums after he found out that “overwhelming” crowd he had touted all week failed to show up. But by the time he landed back at the White House, he looked utterly defeated, which social media users dubbed his “walk of shame.”

Told ya'll he exaggerates about the size of things.

I think I sold that same place out in five minutes. 😹 #donkeyshow pic.twitter.com/JNOwjIQ3hB

Today I released my first campaign ad. It was produced by my kids. Let me know if you like it.https://t.co/OeXvghcnGv pic.twitter.com/CuFKMzdrZB

Your campaign was so preoccupied with whether they could, they didn't stop to think if they should. pic.twitter.com/cfAAkGLttH

Holy shit! Trump can drink water with one hand (without help), while standing upright!!!! That’s it. Election’s in the can!!! https://t.co/oNRESZJA1O

I actually feel sorry for… the bird.

Nickelback had a larger crowd to their concert at BOK Center in Tulsa than Trump could get. That says a lot! #TrumpCoronaVirusRally

They can lift heavy glasses with one hand. pic.twitter.com/Ma11glpNvw

Best thing about the TikTok & Kpop fans reserving tickets is that it actually didn’t block anyone from attending, the tickets don’t reserve seats. That small crowd was legit. They just blew up Trump’s expectations and killed their data haul. #tiktokteens #Emptyseats