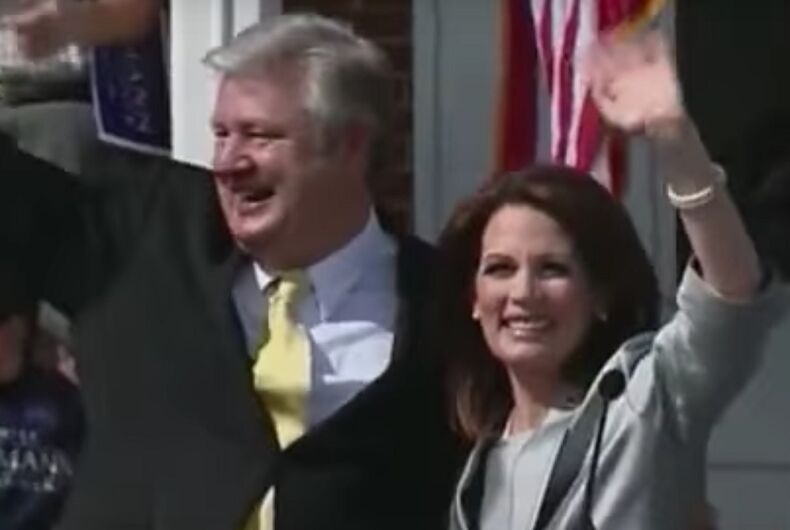 Donald Trump has named Marcus Bachmann – the husband of former Rep. Michele Bachmann (R-MN) – to the President’s Committee for People with Intellectual Disabilities, a Department of Health and Human Services advisory panel.

Marcus and Michele Bachmann own Bachmann & Associates, a Christian counseling practice in Minnesota. Marcus Bachmann, who is not a licensed clinical psychologist, has in the past been caught telling patients that he can make them straight.

“The truth is God has designed our eyes to be attracted to the woman’s body, to be attracted to her breasts,” a counselor at the practice told a gay man named John Becker in a 2011 hidden camera investigation broadcast on ABC News.

“I think it’s possible to be totally free of this,” the counselor said, offering a treatment plan that included reading Bible verses.

“I told my therapist that I was struggling with attraction to the same sex, and that my attractions were overwhelmingly, predominately, exclusively homosexual,” said the gay man who went undercover to the clinic five times, adding that “the goal of his treatment was to end his homosexual urges entirely.”

“God created us all for heterosexuality – he said that twice.”

Andrew Ramirez is a former patient of the practice and said he sought out Bachmann & Associates in 2004 when he was having trouble accepting himself as gay.

A counselor told him his “path for my therapy would be to read the Bible, pray to God that I would no longer be gay,” he said. “And God would forgive me if I were straight.”

Marcus Bachmann long denied that conversion therapy happens at his practice, while saying that he’s “open to talking about” turning gay people straight if a gay person comes in seeking help.

“But if someone comes in a homosexual and they want to stay homosexual, I don’t have a problem with that,” he said in a 2011 Minnesota Star-Tribune interview.

“Is it a remedy form that I typically would use?” he said. “It is at the client’s discretion.”