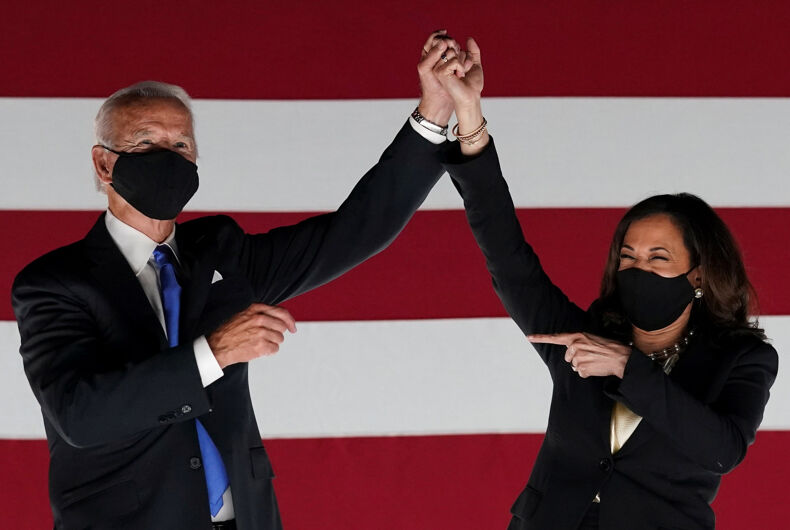 “Ultimately, if this executive order is able to be fully carried out, it will affect everyday Americans who hold biblical and conservative values,” said Tony Perkins of the SPLC-designated hate group Family Research Council.

Biden’s executive order instructs executive agencies that the Biden administration considers discrimination against LGBTQ people to already be banned under federal laws that ban discrimination “because of sex” and to look for ways to implement federal law in light of that. The Supreme Court ruled in favor of this interpretation of the law in Bostock v. Clayton Co. decision last year.

“The Biden administration is planning to go much further in its assault on biological reality and is expected to order schools to abolish girls’ sports and force boys and girls to use the same showers and locker rooms, and maybe even bunk together on school trips,” Perkins warned, adding that “the world’s major religions will be forced to violate their consciences” as a result of Biden’s order.

None of it is true.

Over on Twitter, the hashtag #BidenErasedWomen is trending. TERFs (transgender exclusionary radical feminists) are saying that the executive order to ban discrimination based on sexual orientation and gender identity somehow means that women don’t exist anymore.

One British Twitter user declared that Biden had “erased female people and their sex based rights from US law” but she doesn’t appear to actually understand the law.

The President of the United States just erased female people and their sex based rights from US law.

Possibly without even fully grasping the magnitude of what he has done.

I think twitter should make some noise and let him know.#BidenErasedWomen https://t.co/FfDsDGkSpB

But that didn’t stop the angry tweets about how women don’t have rights anymore.

Biden has erased the sex-based rights of half the population, hard won rights that he signed away in one day. #BidenErasedWomen

Other anti-transgender activists on Twitter focused entirely on sports.

A new glass ceiling was just placed over girls.https://t.co/cGWZqDpxl8

But many people using the hashtag were also arguing against transphobia, pointing out that the first president to take office with a woman vice president maybe has a better record on women’s rights than his predecessor.

#BidenErasedWomen my ass. Bunch of transphobic pricks displaying their hate and ignorance. pic.twitter.com/gMyA5CYJGG

Pete Buttigieg thanks his husband at his historic Senate confirmation hearing