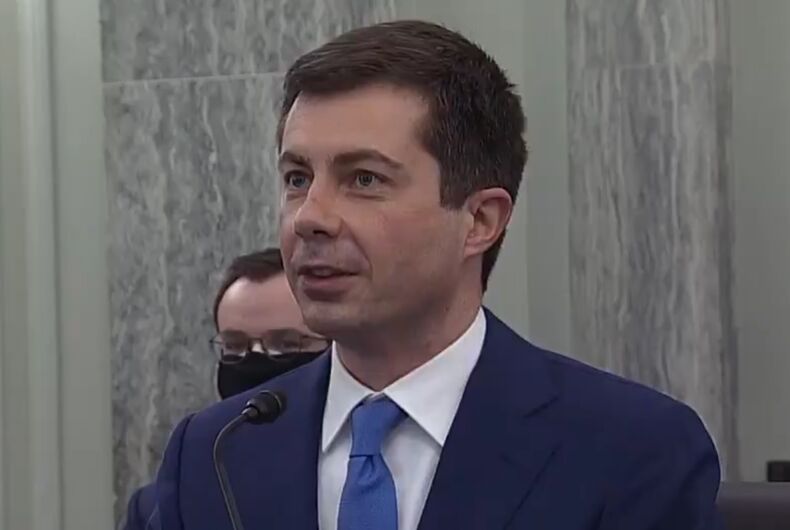 The first out gay nominee for a Cabinet secretary position just had a hearing in a Senate committee where he thanked his husband for his support.

Former South Bend, Indiana mayor and Joe Biden’s nominee for Secretary of Transportation Pete Buttigieg appeared before the Senate Commerce, Science, and Transportation Committee this morning in a historic moment for LGBTQ people and discussed the  details of transportation policy.

In a heartfelt moment during his opening statement, Buttigieg thanked his husband Chasten Buttigieg – who was sitting right behind him, wearing a mask – for his support in the process.

“I’d like to take a moment to introduce my husband Chasten Buttigieg, who is here with me today,” Pete Buttigieg said. “I’m really proud to have him by my side.”

“I also want to take this chance to thank him for his many sacrifices and his support in making it possible for me to pursue public service.”

Transportation Secretary nominee Pete Buttigieg introduces his husband, Chasten, during his opening statement at confirmation hearing: "I want to thank him for his many sacrifices and his support in making it possible for me to pursue public service." https://t.co/nwOs3y6Mqw pic.twitter.com/ZN1qVGy5BN

LGBTQ people on social media recognized the importance of the moment and many were proud of the representation.

The first presidential election I voted in was 1996. It would have been unthinkable for an openly gay man to sit on the inauguration platform with his husband. To hear “Pete Buttigieg and his husband” during television coverage made me smile. We’ve made some progress. pic.twitter.com/csefxtmh0l

All these Republicans thinking they can stump Pete Buttigieg… pic.twitter.com/JmOud8SRaN

If I’d been a kid and seen the popular gay news anchor Rachel Maddow anchoring a presidential inauguration and heard her refer to “likely Transportation Secretary Pete Buttigieg and his husband” it honestly would have changed my whole life.

Conservatives are freaking out over Biden’s new LGBTQ protections