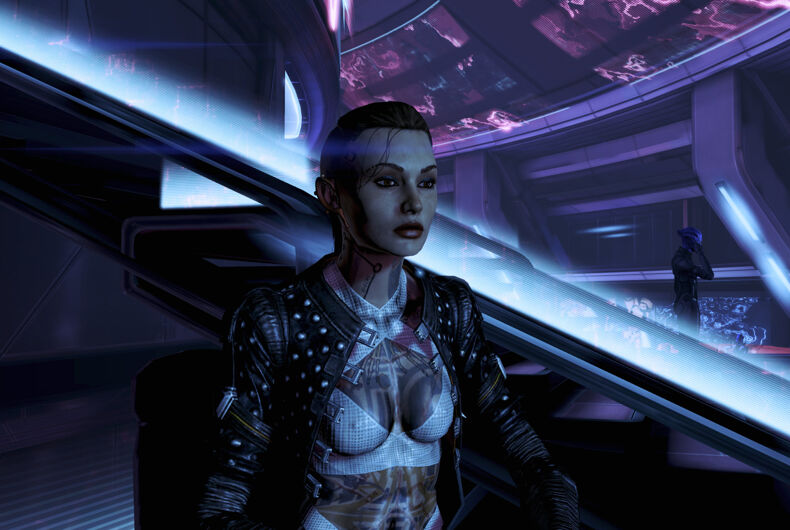 The action role playing video game Mass Effect 2 was one of the most critically acclaimed games in the era it came out. Over a decade later, though, we’re learning that the game’s storyline could have included LGBTQ characters having same-sex romantic relationships.

Two designers that worked on the game revealed that there would have been at least two playable roles in the storyline that would have allowed for same-sex relationships. The storylines were ultimately nixed, though, mainly because no one wanted to deal with the ensuing backlash that would have come from FOX News.

Mass Effect 2 was the second installment of the Mass Effect game trilogy by BioWare and published by Electronic Arts. The game is a third-person shooter where the player assumes a group of characters, human and alien, fighting an alien army in defense of the Milky Way galaxy in a distant future.

When the first game came out in 2007 for Microsoft’s Xbox 360, it was praised for its innovative storytelling and interactive design. But then, of course, came FOX News.

Conservatives on the network such as Martha McCallum and Cooper Lawrence raised hell over the game, claiming it was showing “full graphic sex” to children with parts of the storyline that involved a relationship between different-sex beings, and nicknaming the Xbox 360 console the “sexbox.”

McCallum would admit she never played the game, and would later retract her statements after watching gameplay by noting that she “has seen episodes of Lost that are more sexually explicit.” Still, it reached the point that even anti-obscenity organizer Jack Thompson, who has tried to censor everything from Grand Theft Auto to Mortal Kombat, said “this contrived controversy is absolutely ridiculous.”

But amidst the backlash, Mass Effect was actually banned by Singapore. The decision was reversed, but the issue became big enough to convince the game’s executives to nix anything too controversial in the sequel.

So while Jack, a female character, constantly refers to same-sex relationships, the actual ability for players to see or take part in those relationship while controlling the character was limited in the sequel.

“Mass Effect had been pretty heavily and really unfairly criticized in the U.S. by FOX News,” Kindregan said in a recent interview for The Gamer. “Maybe more people in the world thought that there was a connection between reality and what gets discussed on FOX News.”

“The development team of Mass Effect 2 was a pretty progressive, open-minded team, but I think there was a concern at pretty high levels that if [the first] Mass Effect, which only had one gay relationship, Liara — which on paper was technically not a gay relationship because she was from a mono-gendered species — I think there was a concern that if that had drawn fire, that Mass Effect 2 had to be a little bit careful.”

Kindregan explains, “it was actually very late [in development] that it became a male/female-only romance.” In reality, “She was essentially pansexual for most of the development of that romance.”

The game’s lead designer for cutscenes, Jonathan Cooper, then revealed after on Twitter that he had designed a same-sex male relationship scene between Commander Shepard and another character, Jacob.

“I animated both scenes for Male & Female,” Cooper wrote. “We prevized Jacob as the male/male [with Commander Shepard], matching shot-for-shot from Brokeback Mountain. Was told at the time ‘America isn’t ready for it’. Perhaps it still isn’t.”

We matched Brokeback so it wouldn't be unacceptable – but different rules for film and games I guess. Personally I still believe it was the wrong call to cut, as we protested at the time. People with a problem with can go fuck themselves – they don't deserve to play our games.

“It wasn’t like some anti-gay person high up on the Mass Effect 2 team saying, ‘we’re not going to have that’,” Kindregan reflects. The main reason for the decision “to focus the relationships on a more traditional kind of vector” was solely due to FOX News.

The actress that voices Jack in Mass Effect 2, Courtenay Taylor, also expressed recently that it was her understanding that she was playing a pansexual character. “It’s funny to me because my understanding was always that she was pansexual. So I don’t know if that’s just something I inferred from the character or something that she said that maybe got cut,” she said in a separate sit-down with The Gamer.

“That was, what – 2008/2009? The industry has changed exponentially since then, and BioWare was leading the charge on that.” Taylor pondered, “I don’t know if it came down to a budget constraint or maybe someone being like ‘this is too obvious’ because everyone was like ‘of course she’s a lesbian.’ But my sense was always that she was [pansexual] and it just didn’t get followed through.

“Of course, the community modded it immediately so you can have it your way.”

In Mass Effect 3, Shepard can romantically interact with other male characters when Shepard is designated as a male. Jack, however, is still regulated to opposite-sex relationships.

“Maybe someday Jack will be portrayed as pan,” Kindregan says. Despite rumors, it’s believed that the Mass Effect trilogy is being remastered and re-released this year — eight years after the last installment, Mass Effect 3, was released — will not add any same-sex relationship capabilities to Mass Effect 2.

Multiple ads including LGBTQ people will air during the Super Bowl