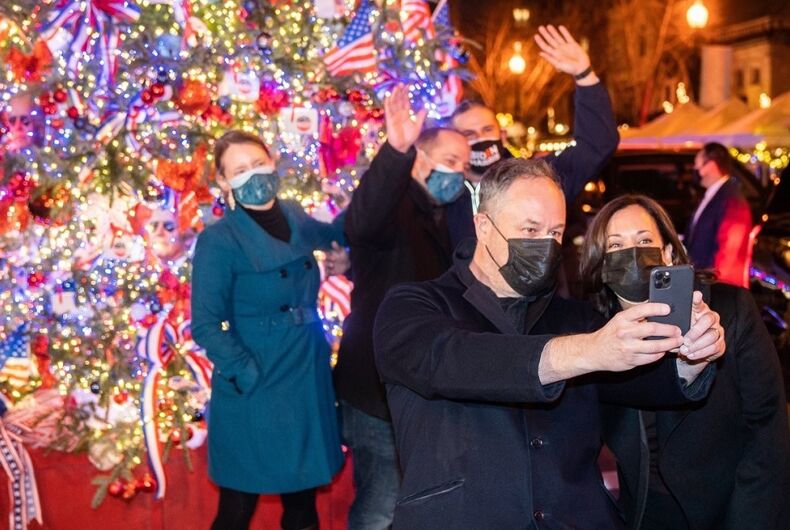 Vice President-elect Kamala Harris visited a tree in D.C.’s LGBTQ neighborhood that had been decorated with her likeness – the “Kamala La La Tree.”

Harris and her husband Douglas Emhoff headed to the restaurant Floriana in Dupont Circle last night to shoot a selfie with the tree.

“Our small businesses have really been hurting across the country so we want to come out and just celebrate them and encourage everyone to support our small business until we get through this,” Harris said at the event.

The tree is part of a D.C. tradition, where Dito Sevilla picks a theme for the tree and then decorates it. His 2018 “Pelos-Tree” – which honored House Speaker Nancy Pelosi (D-CA) – also got media attention.

“Every year since 2012 I decided to label the tree the ‘Official Dupont Circle Holiday Tree,” Sevilla told the Washington Blade. “Each year I select an angel/spirit animal/muse/theme which celebrates culture and when possible that angel is a woman who has changed history.”

Harris has long supported LGBTQ rights. In 2013 as California’s attorney general, she officiated the marriage of Kris Perry and Sandy Stier, the plaintiffs in the case where the Supreme Court overturned the state’s ban on marriage equality, Prop 8.

And just this past year, she worked closely with at least two out LGBTQ people: her Chief of Staff Karine Jean-Pierre and former South Bend, Indiana Mayor Pete Buttigieg, who played the role of Mike Pence as she prepared for her vice presidential debate.