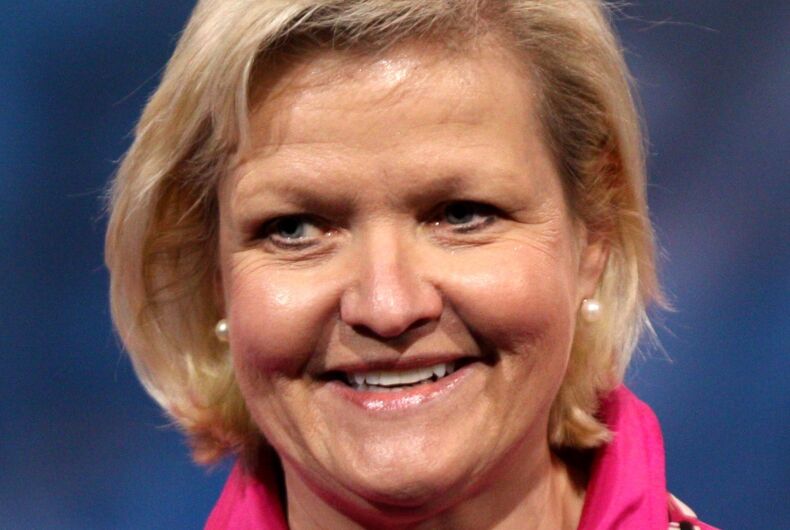 Cleta Mitchell, a lawyer with deep ties to anti-LGBTQ groups and other conservative causes and politicians, has been revealed as one of the attorneys advising President Donald Trump as he attempts to subvert the results of the presidential election.

In fact, Mitchell is vehemently opposed to LGBTQ rights, she’s been described as “a nasty bigot” by a fellow Republican.

Until Trump called Georgia Secretary of State Brad Raffensperger in a desperate attempt to convince the state official to “find 11,780 votes,” Mitchell’s behind-the-scenes role was unknown. She can be heard interjecting in the call and assisting the president with dubious legal theories.

Foley & Lardner, the major law firm with offices worldwide, also seemed to be unaware of Mitchell’s side hustle. The firm has tried to distance itself from her activities, telling reporters that its lawyers were expected to refrain from representing “any parties seeking to contest the results of the presidential election.”

“We are aware of, and are concerned by, Ms. Mitchell’s participation in the Jan. 2 conference call and are working to understand her involvement more thoroughly,” the firm said.

Mitchell, the former board chair for the American Conservative Union (ACU), led a crusade to exclude gay Republicans from their annual Conservative Political Action Conference (CPAC). While the far-right – and now-defunct – group GOProud was allowed to participate in 2011, religious right groups like the Heritage Foundation threatened to boycott the conference if the group was allowed to return.

Trump attended CPAC that year as a guest of GOProud.

As the long-simmering feud continued, one of the group’s co-founders, Chris Barron, described the effort to ban the group with sharp language.

“I think there’s a couple people in Heritage who, at the behest of Cleta Mitchell – who is just a nasty bigot… she got some of the people at Heritage early on fired up about this,” Barron says. “We tried very, very hard to smooth this over and to avoid any public fight with Heritage and then when Heritage came up with their excuse about how this wasn’t about GOProud – first of all, we knew it was, we knew it was six months ago – but we were willing to publicly let them.”

Barron later apologized when the ACU announced the group was not allowed to return the next year and resigned from the organization. Barron went on to co-found “LGBT for Trump” and wrote op-eds extolling how wonderful Trump would be for LGBTQ people.

Instead, in 2016, Barron wrote that he “bitterly regretted” endorsing and supporting Trump in a different op-ed.

“I expected that Trump, a lifelong New Yorker, a man whose own personal life was far from the family-values-crowd version of perfect, would run a campaign that would be libertarian on social issues. Instead, he has actively sought the support of anti-gay zealots like Jerry Falwell Jr.” he wrote.

Falwell, a prominent religious right leader who helped solidify Trump’s support from the religious right, recently resigned as the head of Liberty University after it was revealed he and his wife had been secretly involved with another man sexually for years. It has been suggested that Falwell’s early support came after he was blackmailed into supporting Trump using naked photos of Falwell’s wife and knowledge of the three-way affair as leverage.

“I never thought that Donald Trump was an anti-gay homophobe,” Jimmy LaSalvia, the group’s other co-founder who left the Republican party in 2014 and endorsed Hillary Clinton in 2015, said. “I certainly didn’t think that when I met him back in 2011. But we’ve all learned a lot about who he really is since then. With his political pandering and posturing to endear himself to the intolerant wing of the GOP over the last few years, it doesn’t surprise me that this administration will go down as the most anti-LGBT in history.”