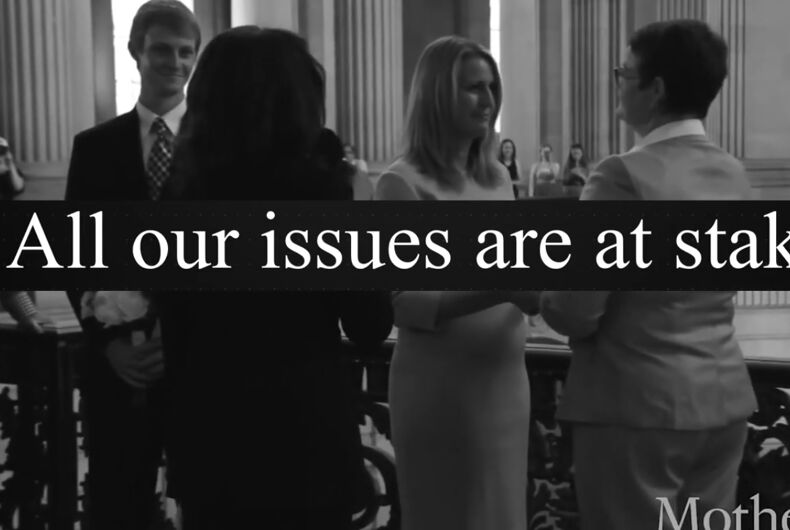 The NOM ad ties protests against police brutality to marriage equality and says they're reasons to support a conservative Supreme CourtPhoto: Screenshot/YouTube

The anti-LGBTQ National Organization for Marriage released a video supporting the confirmation of Amy Coney Barrett to the Supreme Court that shows footage of Sen. Kamala Harris officiating a marriage between two women.

“All our issues are at stake,” text on the screen reads as the video plays in black-and-white to make it look scary. “Marriage. Life. Religious liberty.”

The first part of the ad, which opens with the words “Battle: Supreme Court,” shows footage from protests that occurred this past year. The footage that NOM selected implies that the protests have been violent and will probably destroy the entire country.

Halfway through the ad, though, the video changes to footage of Harris presiding over Kris Perry’s and Sandy Stier’s 2013 wedding. The women challenged Prop 8, which banned marriage equality in California, and won – they got married at San Francisco City Hall by then state Attorney General Harris.

“Amy Coney Barrett is a perfect pick for the US Supreme Court,” NOM says in an accompanying email blast. “A devout Catholic, mom of seven and a gifted intellectual, she shares our beliefs on the issues most important to us – marriage, life and religious liberty.”

“That is why the left hates her so much.”

The blast then asks for donations to the “NOM Education Fund” and says that such donations are “fully tax-deductible.”

Earlier this week, NOM’s co-founder Brian Brown told its followers that Barrett must be confirmed to the Supreme Court to ensure “that the fake ‘rights’ that are constantly demanded by the left – including special rules for homosexuals and the so-called transgendered – will no longer see the light of day.”

Brown has reason to believe that Coney Barrett will work against LGBTQ rights while on the Supreme Court. In 2015, just after the Supreme Court legalized marriage equality in all 50 states in the Obergefell v. Hodges decision, she signed an open letter supporting the Catholic Church’s teachings “on the meaning of human sexuality, the significance of sexual difference and the complementarity of men and women; on openness to life and the gift of motherhood; and on marriage and family founded on the indissoluble commitment of a man and a woman.”

“It is impossible to overstate how much is at stake, not only for LGBTQ people and everyone living with HIV, but for our entire country,” said Lambda Legal CEO Kevin Jennings in a statement. “If confirmed, Judge Amy Coney Barrett will unleash a Supreme Court majority that is hostile to all of our basic civil rights, and the impact will be felt for decades.”

And the LGBTQ Nation Heroes of the Year are…