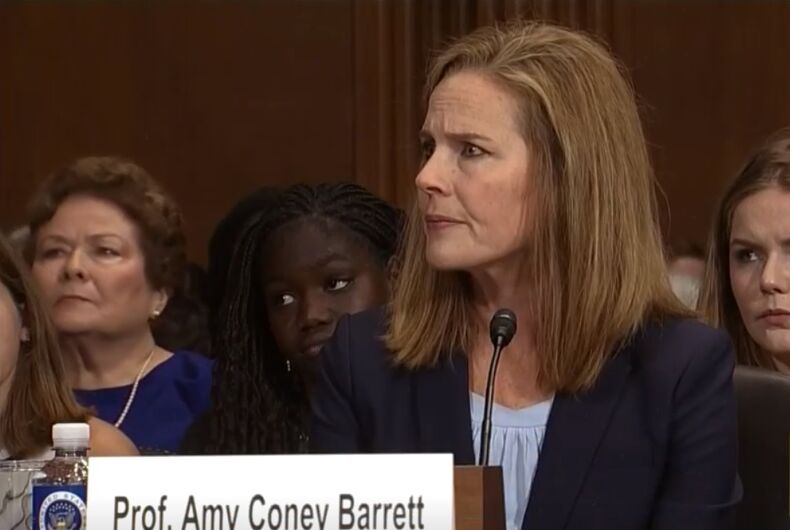 Anti-LGBTQ activist Brian Brown told supporters that Donald Trump’s Supreme Court nominee will be essential to ensuring that rights “for homosexuals and the so-called transgendered… will no longer see the light of day.”

Brown, who is also currently the president of the SPLC-designated hate group World Congress of Families, told followers that getting Amy Coney Barrett on the Supreme Court would shift the court so far to the right that the left is “threatening the country with total chaos, including violence,” in an email blast posted to JMG.

Brown told his followers that Coney Barrett’s nomination could mean a “reversal of Roe v. Wade,” the Supreme Court decision that guarantees the right to an abortion.

“It could also pave the way for the restoration of marriage to our laws and scrapping the illegitimate, anti-constitutional imposition of same-sex ‘marriage’ on the nation,” he wrote.

Her appointment to the Supreme Court “will mean that religious liberty will be restored to its rightful place as a foundational constitutional right, and that the fake ‘rights’ that are constantly demanded by the left – including special rules for homosexuals and the so-called transgendered – will no longer see the light of day.”

“You can be certain that LGBT extremists will be doing everything in their power to block this confirmation,” Brown wrote. “It’s imperative that we be on the front lines fighting for control of the Supreme Court by demanding that Republicans support President Trump’s nominee.”

He has reason to believe that Coney Barrett will work against LGBTQ rights while on the Supreme Court. In 2015, just after the Supreme Court legalized marriage equality in all 50 states in the Obergefell v. Hodges decision, she signed an open letter supporting the Catholic Church’s teachings “on the meaning of human sexuality, the significance of sexual difference and the complementarity of men and women; on openness to life and the gift of motherhood; and on marriage and family founded on the indissoluble commitment of a man and a woman.”

“It is impossible to overstate how much is at stake, not only for LGBTQ people and everyone living with HIV, but for our entire country,” said Lambda Legal CEO Kevin Jennings in a statement.