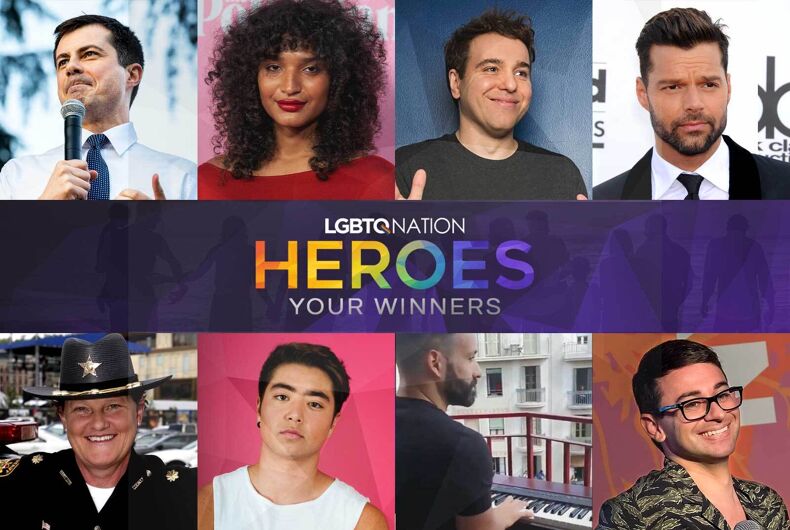 The winners of LGBTQ Nation's Heroes of the Year awardsPhoto: Provided

After over 100,000 votes, the LGBTQ Nation Heroes of 2020 have been decided. Out of the forty nominees, eight are walking away with awards. These heroes champion equality for all of us and make change happen, whether in their local neighborhood or nationwide.

This year has been tough on all of us – especially those of us from marginalized communities – and no one person can change that. There are deeply rooted issues in our society which will take a long time to correct. However, it’s people like these winners that have kept us together and inspired us to fight on – not only for ourselves but for others around us.

That’s why Pete Buttigieg’s win as the Newsmaker of the Year makes complete sense. In the last calendar year, Buttigieg became a household name as the first out Democrat to run for President. The now-former mayor of South Bend, Indiana consistently stayed in the Democratic Presidential primary competition’s upper ranks, even as he faced issues that would have ended the political careers of others.

Even at the end of his campaign, when he withdrew his candidacy for the nomination on March 1, he was still one of the top performers out of a massive field of more established candidates. Ultimately though, “Mayor Pete” forced our society – and many around the world – to seriously consider having a gay head of state.

Buttigieg ultimately navigated the public exposure that his campaign brought with his husband, Chasten, by his side. With Pete’s impending podcast “The Deciding Decade” and University of Notre Dame employment, and Chasten’s memoir, I Have Something To Tell You, the Buttigiegs are arguably one of the most influential LGBTQ couples right now.

While he is filling his post-campaign schedule with non-political work, Pete is also helping out with Biden’s campaign. He would likely become a key part of a potential Biden-Harris administration, making him an early contender for next year’s Newsmaker award as well. For now, we recognize the trailblazing, bold year that Buttigieg had.

Christian Siriano has been deemed the Small Business Owner of the Year for his leadership, offering to supply New York State with masks and other PPE material at the beginning of the devastating COVID-19 pandemic in New York. Sacrificing the production of his own multi-million dollar fashion label, the Project Runway alum is currently fundraising for his staff’s accommodations, in addition to offsetting losses from halting production of his own products.

Our Hometown Hero of the Year is Alberto Gestoso. The pianist’s impromptu rendition of the Titanic anthem “My Heart Will Go On” from his balcony, accompanied by his saxophonist neighbor, soothed millions around the world at the height of the global COVID-19 outbreak.

The Up & Coming Politician of the Year award goes to Charmaine McGuffey. In a heated race in Hamilton County, Ohio, McGuffey (D) ran to be both the county’s first female and first out LGBTQ person elected sheriff. She also ran against the man she alleges fired her because she’s a lesbian – current Sheriff Jim Neil, a Trump-supporting Democrat. She stomped him at the ballot box, winning approximately 70 percent of the vote.

Jonathan Lovett earned recognition as the Pundit of the Year. “Washington’s funniest celebrity” is now closing his third year recording the Lovett or Leave It podcast at Crooked Media. It is a consistent Top 100 show on iTunes in the United Kingdom, United States, Germany, Canada, and Australia.

The accolade of Instagram Advocate of the Year goes to Schuyler Bailar, a swimmer, athlete, and researcher. With over 134,000 followers, his posts – some simple, some complex, most with a caption written on a whiteboard – brings visibility to issues and experiences including body positivity, mental health, and gender dysphoria.

Indya Moore has become our Twitter Advocate of the Year. Known as an unapologetic bastion for LGBTQ rights online, the Pose star has also brought awareness to issues impacting trans and gender non-conforming people. Most recently, they have successfully recruited thousands of people via the social network to have their bone marrow tested, in hopes of finding a match for their close friend with leukemia, Walela Nehanda.

The Celebrity Activist of the Year is the legendary Ricky Martin, who continues to fight against those in power over ten years since first coming out. The King of Latin Pop used his influence to support protests in Puerto Rico against the territory’s anti-LGBTQ governor and recent legislation that took rights away from LGBTQ residents. Martin is also a UNICEF ambassador and the recipient of the National Visibility Award from the Human Rights Campaign this past October.