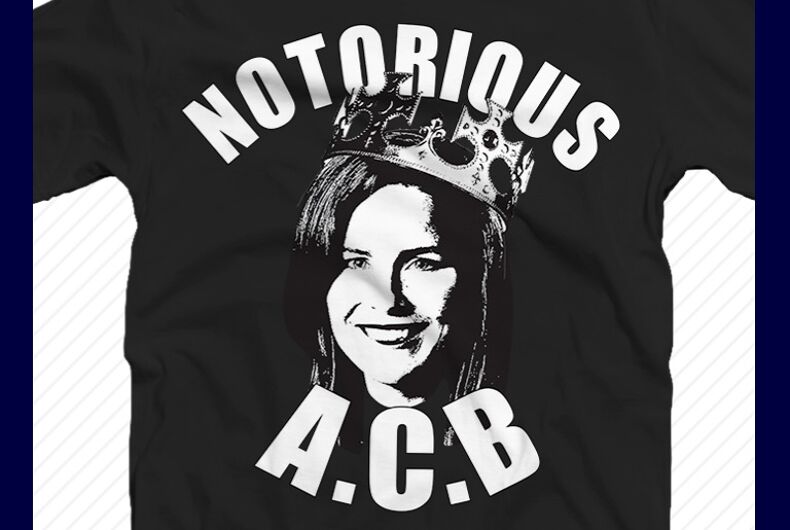 The T-shirts are a reference to how some people referred to Ginsburg as “the notorious R.B.G.” as a sign of respect for her 27-year career on the Supreme Court and the decades during which she worked to advance women’s equality.

Related: You can get an “I’m gay for Gorsuch” t-shirt now & Twitter has thoughts about it

On Saturday, Trump nominated Barrett to the Supreme Court seat that opened when Ginsburg passed away the week before. Soon the National Republican Senate Committee (NRSC) was tweeting a link for people to buy the T-shirts.

The T-shirt costs $20, although the NRSC website asks for a donation of up to $5000 with each T-shirt for a “SUPREME COURT DEFENSE FUND,” even though the fund is clearly for the upcoming election.

“Democrats will do ANYTHING to stop President Trump and Senate Republicans from filling the Supreme Court vacancy. Protecting our Majority has never been more important. HELP!” the website says.

On Twitter, people found the T-shirts to be less than respectful.

Even though we already we're dealing with piles of human garbage, this is unbelievably disrespectful.

How nice of you to make a mockery of RBG before she’s even been buried. Such a republican thing to do.

you know what, she has to earn her own GD nickname, and it sure as hell is not the same as RGBs, especially after a piddling legal career.

The moniker “Notorious R.B.G.” is a reference to the rap legend Notorious B.I.G., who, like Ginsburg, was from Brooklyn.

Eddie Redmayne stands up for J.K. Rowling against internet “vitriol”