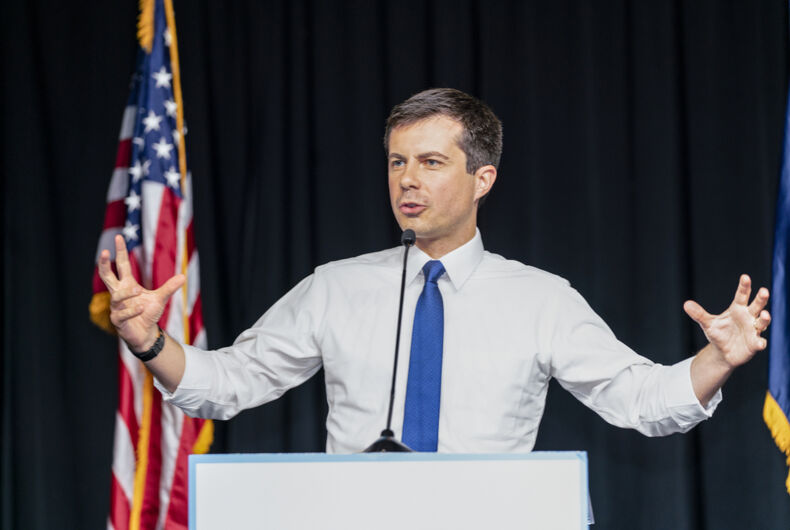 Two sources told Bloomberg that Buttigieg is playing Pence “because of his familiarity with the Vice President, who was governor of Indiana when Buttigieg was mayor of South Bend.”

Pence has a long history of anti-LGBTQ activism, going back to 1992 when he said that being gay is “learned behavior” and his 2000 House campaign where he advocated federal funds for conversion therapy to fight HIV; continuing to his time in the House and as Indiana’s governor, when he opposed LGBTQ equality every chance he got; and into his tenure as Vice President, where he has reportedly been at the center of the Trump administration’s anti-transgender efforts.

During his presidential campaign, Buttigieg called out Pence’s homophobia.

“My marriage to Chasten has made me a better man,” Buttigieg said in April 2019. “And yes, Mr. Vice President, it has moved me closer to God.”

“That’s the thing I wish the Mike Pences of the world would understand, that if you have a problem with who I am, your quarrel is not with me. Your quarrel, sir, is with my creator,” he said. “Speaking only for myself, I can tell you that if me being gay was a choice, it was a choice that was made far, far above my pay grade.”

Pence clapped back at Buttigieg, accusing the mayor – who has been very open about his Christianity – of attacking Pence’s “Christian faith.”

“He said some things that are critical of my Christian faith and about me personally, and he knows better, he knows me,” Pence said at the time, adding that he and Buttigieg had a “great working relationship.”

“I have my Christian values. My family and I have a view of marriage that’s informed by our faith. And we stand by that.”

Harris, meanwhile, is trying to tone down expectations in advance of the debate, which is perhaps a smart move since media coverage of political debates often ignores substance in favor of specious arguments about who exceeded or failed to meet arbitrary expectations.

Pence is “a good debater,” Harris said at a fundraiser earlier this week. “So, I’m so concerned, like I can only disappoint.”