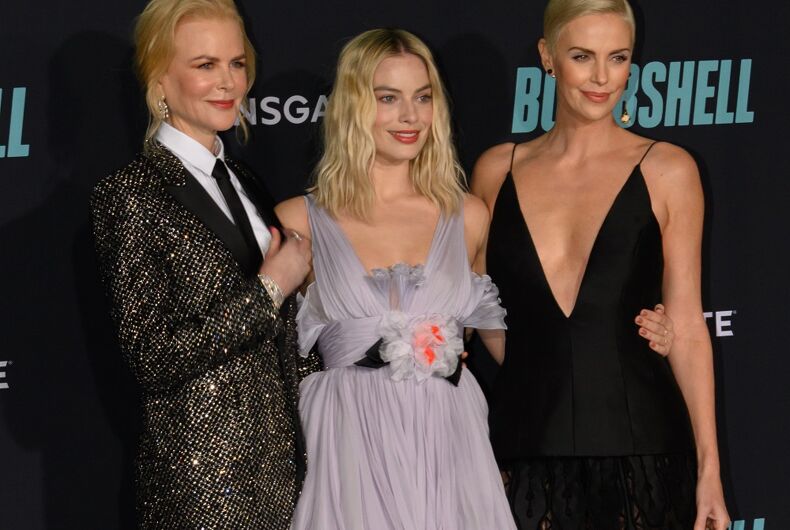 But as a bisexual woman, I felt excluded from that momentous speech when Perry unwittingly skipped over the word “bisexual” as he stated “gay,” “lesbian,” and “transgender.” And this is happening during Bisexual Awareness Week, which culminates with Celebrate Bisexuality+ Day today.

Bi+ people make up over half of those who identify as lesbian, gay, or bisexual, and people of color are more likely than white people to identify as bisexual. But while 52 percent of the LGB community is bi+, out of the 22 films from mainstream studios that GLAAD identified as containing LGBTQ characters in 2019, only 14 percent were bisexual. Sixty-eight percent were about gay men and 36 percent were about lesbian stories. Further, none of the bisexual characters in the three identified films were men.

One of the inclusive films, Jay Roach’s Oscar-nominated biographical drama Bombshell, has captivating and saucy pillow talk and office camaraderie between Kayla Pospisil, played by Margot Robbie, and Jess Carr, played by Kate McKinnon. But like so many others, it frustratingly misses the mark on bi+ representation.

While relatable, the script failed to give Kayla’s otherwise plucky voice the right words to stand up to bisexual erasure. Just as Perry is calling for diverse storytelling, now is a time for bi+ people to be visible, and to call for an end to Hollywood’s tradition of erasing the bisexual majority.

A few years ago, I had a fun three-month dating relationship with a woman who identifies as a lesbian. Among other commonalities our politics and passion aligned, but one “issue” lingered throughout this short-lived relationship: my bisexual identity.

She once said something so shocking and sexual that I can’t repeat it, but I’ll give you an example that is safe for work: “You can’t be a true feminist if you are bisexual.”

To her and many others, if I’m willing to date guys then I’m letting the female side down and I’m “not feminist enough.” As a bisexual woman, it’s devastating to have your identity belittled and unfortunately all too common.

In 2015, a gay male friend asked me if I’d switched teams because I had a boyfriend at the time. “Nope. I’m still bisexual,” I replied.

Unfortunately, Hollywood continues to reinforce such harmful stereotypes and maintains the binary of sex, gender, and sexual orientation.

This is why I was so excited to watch the portrayal of fictional character Kayla in Bombshell and so disappointed to see it become the latest major film to fall into the trope of bisexual erasure. With a dearth of bisexual representation year after year, Bombshell is the most recent major film that the industry can use to course-correct.

It follows films like Bohemian Rhapsody where Freddie Mercury (played by Rami Malek) tells his fiancée Mary Austin that, “I think I’m bisexual.” Mary responds sharply, “No Freddie. You’re gay.” Birds of Prey had a blink-and-you’ll-miss-it nod to Harley Quinn’s bisexuality and Wonder Woman was criticized for ignoring that Diana Prince is canonically bisexual in comics, a move that sparked a viral Change.org petition to make Wonder Woman bi+ in the sequel.

In Bombshell, Kayla is an ambitious, Christian conservative, classic model of a woman who displays tenacity, courage, and strength in a toxic workplace in order to reach her career goals. She seemingly gives no mind about her sexual orientation.

The joy and ease with which Kayla and her lesbian co-worker Jess playfully chat in bed after a sexual romp runs seamlessly. They both quickly show vulnerability, which fosters trust. Jess outs herself as a Hillary Clinton supporter, as well as a lesbian.

Kayla shows no indication of questioning why she ended up in bed with Jess, even if those audience members who hadn’t read the spoilers are surprised. I absolutely loved Kayla and Jess together regardless of whether they lasted for 15 hours or for 50 years.

So I was gut-punched when later in the film Jess says to Kayla, “I’m a lesbian at Fox News. I can’t go on a date with a dude and make it all go away.” Jess’s outburst happens when Kayla leaves a male date in a restaurant and calls her in tears, finally finding the courage to share that Roger Ailes had been sexually assaulting her.

Why this conversation has to happen against the backdrop of Kayla’s date with a man is questionable. Is the message here that in times of fragility, a bisexual woman goes to a man? Having Jess use her own sexuality against Kayla at this moment is the last thing Kayla needs, especially by an intimate friend.

But sadly, I know how this exchange accurately represents a lot of the harmful bias we bi+ people hear, even from our own community. Kayla is too traumatized to explain that going on a date with a guy does not now make her straight, nor does it make any kind of pain go away.

Triggered by memories of lesbians refusing to date a bi+ woman because they believe she’ll end up leaving them for a man, I felt like I wanted to jump out of my seat and shout, “There’s a B in LGBTQ and dating a dude makes nothing go away!”

From Jess’s perspective, I recognize that her sexuality is more visible because being seen with another woman leads to the assumption that both women are lesbians, but not being seen as bisexual – regardless of whether you’re dating a man, woman, or a person of another gender – results in higher rates of poor health, employment discrimination, economic insecurity and sexual violence due to stigma.

The Centers for Disease Control and Prevention report that 46 percent of bisexual women have been raped. The figures for heterosexual and lesbian women are 17 percent and 13 percent, respectively.

Jess’s line feels like a double assault. Bisexual women are not seen for our sexuality, nor for the abuse we face at higher rates.

While Jess gets to validate our assumptions by telling us she is a lesbian, we have to draw our own conclusion that Kayla is on the bi+ spectrum. She confidently chuckles, “I’m not a lesbian” after sleeping with Jess, and we see her go on a date with a man, but her script doesn’t verbally affirm any label of sexual orientation.

We’re simply making the assumption that she is bi+. This leaves the audience, as usual, to conjure the typical tropes of bisexual people being indecisive, confused, questioning, or on a “journey” to being gay or lesbian.

But Kayla is gutsy and takes action in other areas of her life, and she’s completely comfortable being in bed with Jess. This is not a woman who is questioning her orientation and it would have aligned with her character to not merely state, “I’m not a lesbian,” but to affirm her sexuality with words like “I’m bisexual” or “I’m pansexual.”

So, as Tyler Perry called out, and Hollywood grapples with improving diversity and inclusion, studios and production companies can do better by involving bi+ industry members in the creative process. The lack of representation or problematic depiction of bisexuality has real world impact for our community. We deserve a seat at the table when it comes to telling our stories.

In Bombshell, Kayla ends the film as a fiercely empowered woman who refuses to box herself into an abusive career, and me wanting to start a standing ovation for her being a bisexual badass at the same time. If only Kayla, like so many other bi+ Hollywood characters, had been given the chance to verbalize her truth.

Definitions: Bisexual, bi+, and pansexual are used here as synonyms meaning to have the capacity to be romantically and/or sexually attracted to someone of the same or a different gender from yourself. Learn more at glaad.org/bisexual.

Fiona Dawson is an Emmy nominated and SXSW Audience Award-winning filmmaker. She hosts NOW with Fiona sharing positive stories of kindness and courage in the face of adversity. Fiona is a GLAAD contributor and a bisexual, cisgender, immigrant, woman advocating for the LGBTQ community.

What’s it like to be visibly bisexual? It’s others constantly telling you who you are