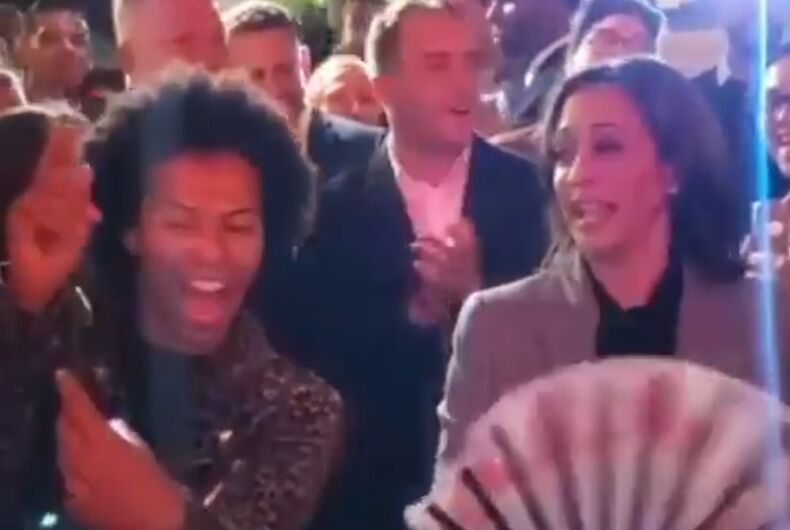 A video of a drag queen showing Senator and 2020 Democratic presidential hopeful Kamala Harris (D-CA) how to properly thworp a fan has gone viral.

“You do it, I want to see you!” Shangela says, handing a fan over to the esteemed senator.

Harris botches the thworp, so Shangela shows her how it’s done a couple of times.

Harris then thworps the fan like a boss and the crowd cheers.

HALLELOO for HARRIS!! SENATOR Kamala Harris, that is. I met her tonite to chat with her about her advocacy for LGBTQ rights and Equality, and I can tell you that she has been and will continue to be a fierce ally for our community. I don’t agree with every decision she’s ever made but I can tell you my hope is that as she pushes forward she grows even more in tune with the needs of every member of the LGBTQIA+ family. I can for sure say I am proud to see a strong, intelligent, dedicated Black/Indian woman going after the Democratic nomination, and I urge all you to get informed about these candidates so you can make an educated VOTE for yourself, whoever that may be. And hey, check out her skills with the Halleloo fan! Now that’s a PRO! ❤️🇺🇸🌈 @kamalaharris

Shangela has endorsed Harris for high office. She told the LA Blade that Harris “is one of the most inspirational candidates running right now and as a representative of the LGBTQ community, and as a gay person and as a Black person, as a person interested in being out there and having my voice heard – I feel like she’s listening.”

Shangela already has the whole world screaming halleloo, now let’s see if she can get the White House to do the same.