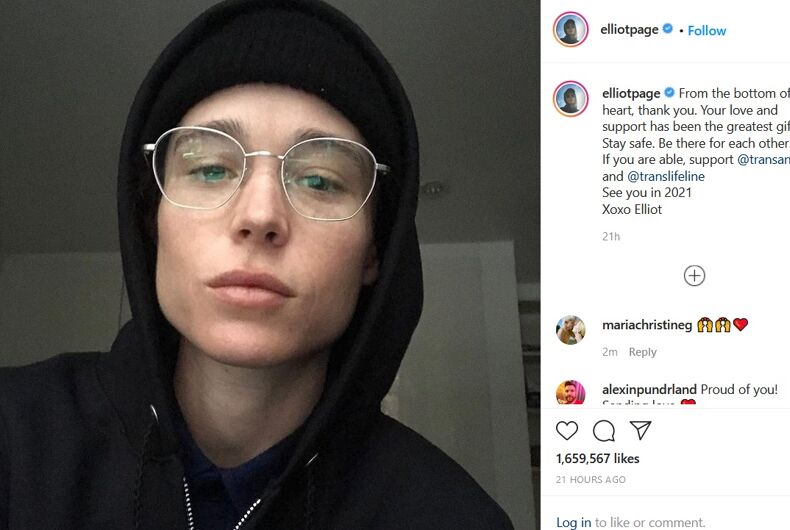 Actor Elliot Page has posted on social media for the first time since coming out as transgender this month.

He took the opportunity to thank everyone for supporting him in the weeks after the star of Juno and The Umbrella Academy announced, “I am trans, my pronouns are he/they and my name is Elliot.”

“From the bottom of my heart, thank you,” Page wrote. “Your love and support has been the greatest gift.

“Stay safe. Be there for each other,” he implored. He then added a call for support: “If you are able, support @transanta and @translifeline.”

TransLifeline is a peer support & crisis hotline for trans people, with phone numbers in the U.S. and Canada. Their website states that they’ve answered more than 100,000 phone calls from trans people in need of support. They are currently running a “Holiday Commissary Fundraiser” to support their work.

Page has a reputation for being a genuinely nice person and the outpouring of love for him after he shared his truth with the world has been remarkable. His coming out was the talk of the town on social media, with Twitter rallying around the 33-year-old. Netflix and Sony were quick to defend the talent against attempts to misgender or disparage him when the news first broke.

Meanwhile, Page is preparing to film the upcoming third season of The Umbrella Academy, which airs on Netflix. He will continue to play his character, a cisgender woman, but all credits and pronouns have already been updated to reflect Page’s coming out.

From the bottom of my heart, thank you. Your love and support has been the greatest gift.
Stay safe. Be there for each other.
If you are able, support @transanta and @translifeline
See you in 2021
Xoxo Elliot https://t.co/cFCyGF5Mg4

How LGBTQ people can handle difficult conversations during the holidays