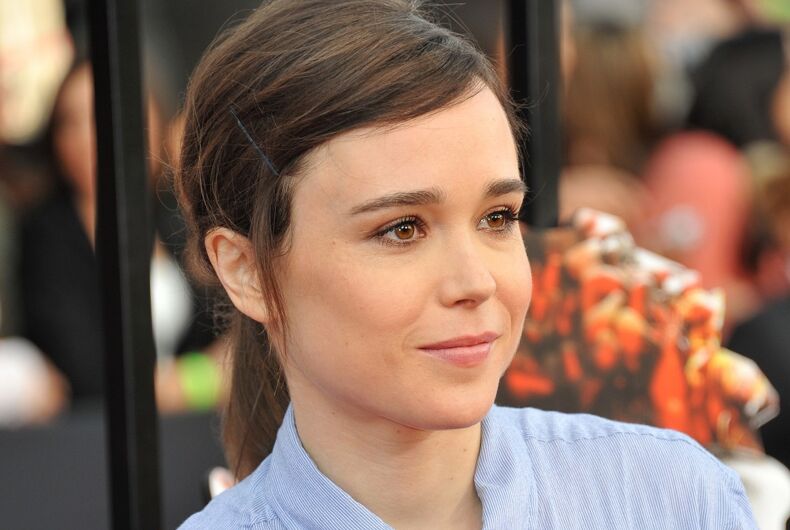 Elliot Page will continue to play a cisgender woman on the upcoming third season of The Umbrella Academy on Netflix, as the streaming service congratulated him on his transition on Twitter and changed his name in the credits to reflect his name.

Yesterday, Page came out as transgender in a statement posted to social media: “I want to share with you that I am trans, my pronouns are he/they and my name is Elliot.”

Related: Everyone is sending love to Elliot Page after he came out on Twitter

Netflix was quick to congratulate him and send their love.

So proud of our superhero! WE LOVE YOU ELLIOT! Can't wait to see you return in season 3! 🎻 🖤

Page plays the character of Vanya Hargreeves on the superhero series The Umbrella Academy, which has aired two seasons on Netflix and has gotten the green light for a third season. Vanya is a cis woman who plays the violin and has the power to control sound waves, often for destructive purposes.

“Trans actors can and do play both trans and cisgender characters. I’m sure Elliot will continue to be brilliant in Umbrella Academy and many different types of roles in the future,” GLAAD’s Nick Adams said.

In the meantime, Netflix was quick to update Page’s name in credits for the series and other media that Page acted in. 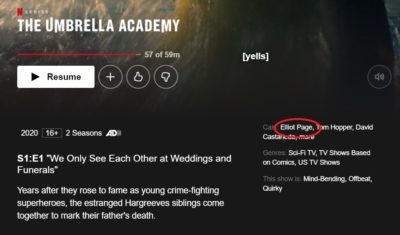 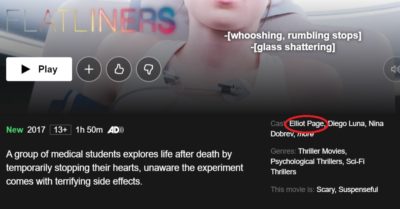 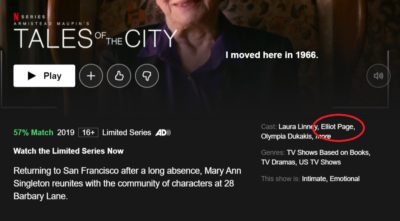 His social media handles were updated at the time of his announcement yesterday and Wikipedia corrected the name on his page shortly after. Fans also noticed that Letterboxd and IMDB updated his name as well.

In a post on Instagram, Page’s wife and dancer Emma Portner said that she’s proud of him.

“I am so proud of @elliotpage,” Portner wrote. “Trans, queer and non-binary people are a gift to this world. I also ask for patience & privacy but that you join me in the fervent support of trans life every single day. Elliot’s existence is a gift in and of itself. Shine on sweet E. Love you so much.”

Page shot to stardom with the hit 2007 film Juno, for which he got an Oscar nomination. He also appeared in two X-Men films and the 2010 science fiction film Inception.

“I feel overwhelming gratitude for the incredible people who have supported me along this journey,” Page wrote in his coming out statement yesterday, acknowledging “how much privilege I carry.”

He said that he loves being trans and queer and that his “joy is real, but it is also fragile.” He’s “scared of the invasiveness, the hate, the ‘jokes,’ and of violence.”

He also had a message for the politicians and media figures who attack transgender rights.

“To the political leaders who work to criminalize trans health care and deny our right to exist and to all of those with a massive platform who continue to spew hostility towards the trans community: you have blood on your hands,” Page wrote. “You unleash a fury of vile and demeaning rage that lands on the shoulders of the trans community, a community in which 40% of trans adults report attempting suicide.”

“Enough is enough. You aren’t being ‘canceled,’ you are hurting people. I am one of those people and we won’t be silent in the face of your attacks.”