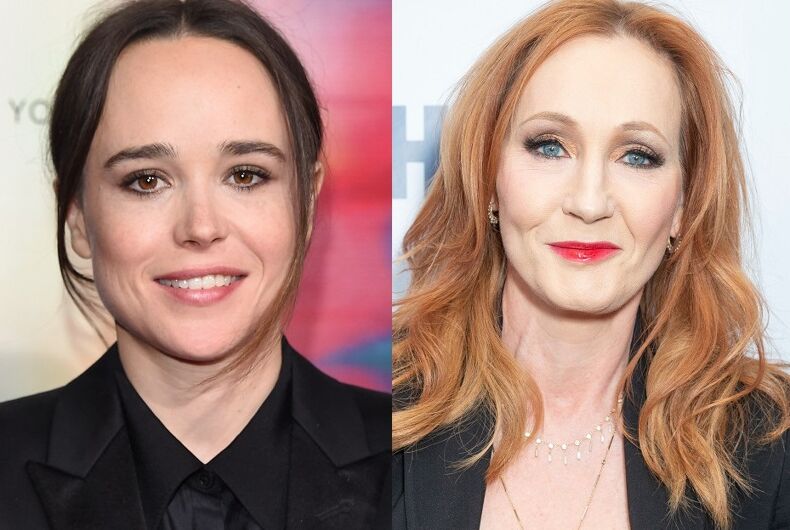 Elliot Page came out earlier this week and celebrities all over the world congratulated him. But some people were wondering… what happened to J.K. Rowling?

The Harry Potter author spent a good part of this year railing against transgender people on Twitter, but she hasn’t tweeted at all for weeks. Her last tweet from her usually active account was posted on November 10.

So people wrote jokes instead. Here are just a few scenarios people imagined about how Rowling reacted to an Oscar-nominated actor living his truth.

jk rowling is looking at emma watson like “don’t you fucking dare do it…” pic.twitter.com/M8j3diQGvC

JK Rowling when she hears about Elliot Page pic.twitter.com/sD8grWkLWi

Similarly, I hope JK Rowling is having an awful day :)

One of the first things I thought of too. Happiness and praise of Elliot coming out like this must be a real slap in the face to JK Rowling. And I love it. There’s nothing that makes hateful people angry like other people being happy and loved for it.

JK rowling is changing all the bath room locks as we speak. #ElliotPage pic.twitter.com/9rEYr9oq6I

While some people are delving into some gallows humor, it’s important to remember that Rowling’s transphobia may have hurt a lot of people in her home country as she has been tweeting anti-transgender sentiment to 14 million people, many of whom probably don’t know much about transgender people other than what they read on the internet.

Earlier this week, the U.K.’s High Court ruled that minors cannot properly consent to puberty blockers, which need to be taken as a minor in order to block puberty to give a transgender person and their family and doctors more time to decide how to proceed.

While the effect of Rowling’s rhetoric on the court decision can’t be known, Rowling has used her enormous platform to fearmonger specifically about transgender youth and puberty blockers.

Congrats and welcome to team trans, Elliot Page! And we apologize in advance for anything JK Rowling has to say about this

Meet the trans entrepreneur who is queering the fashion industry