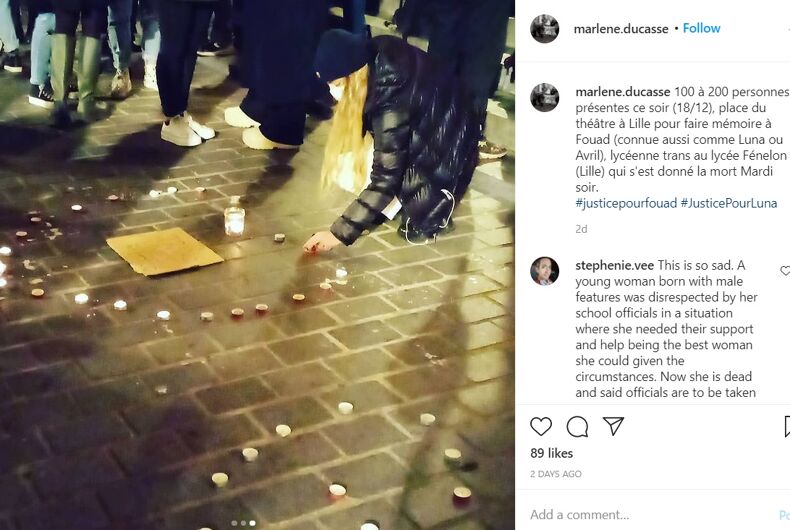 Hundreds of people attended a vigil for Avril, the transgender teenager who died by suicide last week just after she was humiliated by her guidance counselor when she wore a skirt to school.

The teen who attended Lycée Fénelon in Lille died by suicide last week, raising questions in France about the treatment of transgender teens in school. Defenders of the school said that they bear no responsibility and stressed that the teen was living in a youth shelter – possibly because she was rejected by her family – while advocates for transgender equality pointed out that she had been humiliated at school just weeks prior, where she suffered “psychological violence.”

“High school students from Fénelon and supporters from everywhere gathered this morning in front of [Avril’s] (or Luna’s) former high school,” wrote poet Marlène Ducasse on Instagram this past Friday, with pictures of the assembled mourners.

In a separate Instagram post, Ducasse said that 100 to 200 people attended a vigil on Friday night for Avril in Lille.

In early December, Avril posted a video to social media of her getting yelled at by her guidance counselor.

Last week, her school, Lycée Fénelon in Lille, announced that she had died by suicide. The school even misgendered her in the announcement, using the masculine article “un” to refer to her.

Then the leader of the school’s parent-teacher association, Jean-Yves Guéant, said in an interview that it was true that she was sent home earlier in the month because she was wearing a skirt, but denied that that had anything to do with her later suicide.

Because of TETU‘s reporting, LGBTQ Nation is referring to her as Avril.

Glitter-bomber booby traps packages to give thieves what they deserve