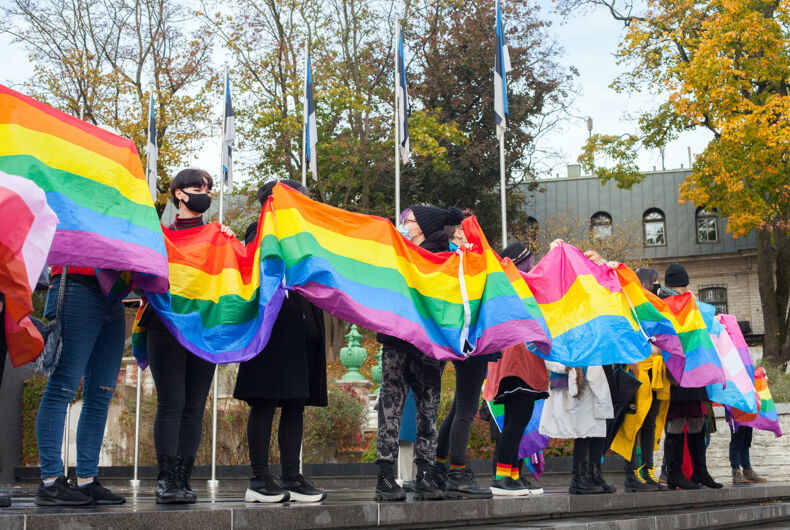 People in Tallinn, Estonia with flags for the universal right to marriage on freedom square on October 18, 2020Photo: Julia Kuznetsova / Shutterstock.com

2020 was the worst year for LGBTQ rights in the past two decades in the European Union.

The conservative governments of Hungary and Poland abused the media focus on the coronavirus pandemic, to instead spread a different kind of virus: one that allowed them to take away basic rights from the LGBTQ community without any opposition. This anti-LGBTQ virus threatens to spread to the rest of the European Union (E.U.), and to other minorities if we do not act effectively.

In 2019, terrible stories reached us from local politicians who set up anti-LGBTQ campaigns in Hungary and Poland. My task for 2020 was clear: to unite the progressive civil society in the E.U. around LGBTQ rights. I deliberately started the year in Budapest, Hungary and Warsaw, Poland, instead of in Brussels, Belgium.

While we, the LGBTQ community, felt that things were getting better and better, the ultraconservatives have restructured in a highly professional way. They are backed by American evangelists close to the Donald Trump administration, and Russian oligarchs who were tasked by the Kremlin to destabilize Europe. As a result, they have unlimited resources to fight an anti-LGBTQ war.

This war is certainly not only raging in Central and Eastern Europe. Belgian, Dutch, French, Italian and Spanish conservative politicians are also associated with these networks.

During my meetings with diplomats and philanthropists about a restructuring of the European liberal democratic movements around LGBTQ rights, enthusiasm was great. According to them, it was time to not only look ahead, but also defend what we had already achieved. They immediately showed up with all kinds of funds.

That enthusiasm subsided completely when the first signs of the impact of the COVID-19 crisis on the E.U. began to appear. During a meeting in The Hague at the end of February with a top diplomat, it soon became clear to me that considerable cuts would be made on budgets for human rights. When the pandemic hit the United States, more potential funders also withdrew.

While the majority of European governments focused on their response to COVID-19, Hungarian Prime Minister Viktor Orbán fired a first warning shot at LGBTQ rights toward the end of February. He called on his colleagues from the European People’s Party to actively fight same-sex marriage across the continent. Fortunately, many Western members of the European Parliament vetoed the proposal.

Three weeks later, while we all started working from home, the Polish LGBTQ activists from the Atlas Of Hate, who exposed the “LGBTQ Free Zones”, were prosecuted. The Polish arch-conservative legal organization Ordo Iuris, which has links with Russia, presented a civil party for municipalities designated by LGBTQ activists as “LGBTQ Free Zones”. The activists gave them that name after they adopted so-called “Charters to Combat LGBTI Ideology.” According to Ordo Iuris, the activists are slandering the communities by calling it otherwise.

The day the lockdown was declared in Hungary, a new law was also quietly proposed that would wipe out any legal recognition of trans and intersex people. Hungary was therefore going a step further than, say, Russia or Azerbaijan had.

Hungarian LGBTQ activists mounted “COVID-19 proof” protests, but it did not help. A month later, the law was passed.

Meanwhile, the anti-LGBTQ campaign raged on in Poland as well. During the presidential elections, current President Andrzej Duda made anti-LGBTQ rhetoric a priority. He called the “LGBTI ideology more harmful than communism” to Poland.

Two days after his election, LGBTQ activist Margot Szutowicz was arrested by Polish police. It was the beginning of a revolutionary period of protest in Poland. When the same activist was sentenced to three months in prison for blasphemy three weeks later, the Polish Stonewall broke out in Warsaw. The night of her arrest, there was a confrontation between LGBTQ activists and the police. As many as 48 activists were handcuffed. They were taken to secret locations and initially denied access to a lawyer.

The Polish Ombudsman even found a violation of an activist’s sexual integrity. These are situations that we normally see in Russia, not in an E.U. Member State.

A wave of solidarity for the Polish LGBTQ community spread across Europe. During my speech at a solidarity protest in Budapest, I called on the European Council (the heads of states in countries that comprise of the E.U.) to call an urgent meeting on the situation in Poland. If the E.U. permits human rights violations such as those occurring in Russia, they will bury the entire European project of norms and values if it’s permitted in its member states.

I also called on the European Commission (the executive arm of the E.U.) to start an infringement procedure under Article 2 of the E.U. Treaty. That article provides that E.U. member states respect human rights.

The E.U. did nothing at all.

The silence of the E.U. strengthened conservatives to continue their war against sexual and gender minorities. For example, the Dutch minister of education Arie Slob defended religious schools that convicted LGBTQ persons during their lessons (on which he later apologised for). The Romanian government tried to ban “Gender Studies” from their universities.

The Polish Supreme Court, controlled by the Polish government, took away the few abortion rights that existed for women in the country. Hungary passed a constitutional amendment that makes it impossible for same-sex couples to adopt a child and educate children about LGBTQ equality.

2020 should be a wake-up call for all European Democrats. Never before have human rights been under so much pressure in the E.U. We must join forces in defense of LGBTQ rights. We’re exhausted, but we’re ready to fight.

LGBTQ people are the first victims of an autocratic wave sweeping across the E.U. If we do not stop this immediately, the entire European peace project is in danger of being destroyed.