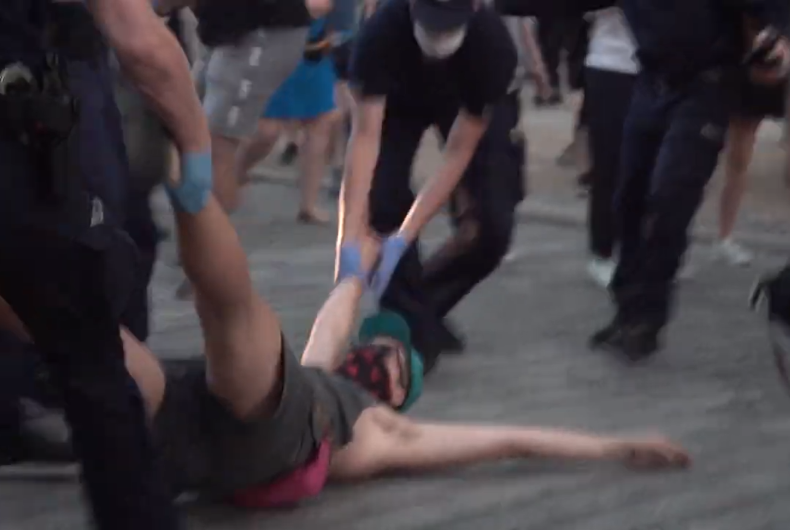 Police drag away a man protesting after an LGBTQ activist was arrested for hanging a pride flag on a statue of JesusPhoto: Screenshot

Thousands of protesters took to the streets of Warsaw and other Polish cities over the weekend in what is being dubbed “Polish Stonewall” after police attacked the crowds, arresting dozens while several other activists are missing.

“Give us Margot back!” protesters chanted. “You will not lock all of us up!”

“The police were aggressively pushing the protesters out of the way, knocking people to the ground and holding them down with their boots,” the Campaign Against Homophobia, a Warsaw-based group, told the Associated Press.

Polish lawmakers protested Duda’s inauguration by wearing rainbow-colored outfits and arranging themselves to form the pride flag during the ceremony. They also wore rainbow-colored masks.

Duda won reelection by demonizing LGBTQ people and campaigning against adoption and marriage rights. The phrase “LGBT are not people, they are an ideology” was a campaign staple.

Szutowicz, a member of Stop Bzdurom (Stop the Nonsense), has been placed in pre-trial detention for two months. Officials allege that she hung rainbow flags from statues in the city, including one of Jesus. They say she also cut the tires of a van that was driving around the city airing anti-LGBTQ propaganda over loudspeakers like “homosexuals are preparing society to accept pedophilia.”

“Perhaps the knife that was used to destroy the van back then will be used for a bigger crime next time,” Ziobro said. “There can be no license for this type of attack … we have to agree with this and stand together against criminals.”

Over the past year, one-third of Poland’s territorial areas and municipalities declared themselves LGBT-free zones, mostly in the southeast of the country. The movement, led by the Law and Justice Party (PiS), is meant to remove LGBTQ “propaganda” from public, which proponents of the measures see as “Western decadence” and believe LGBTQ people “threaten our identity, threaten our nation, threaten the Polish state.”

This is what’s happening in Poland as we speak! Please spread the news and sign petitions! #MuremZaStopBzdurom #margot pic.twitter.com/JiWLrVVBQW