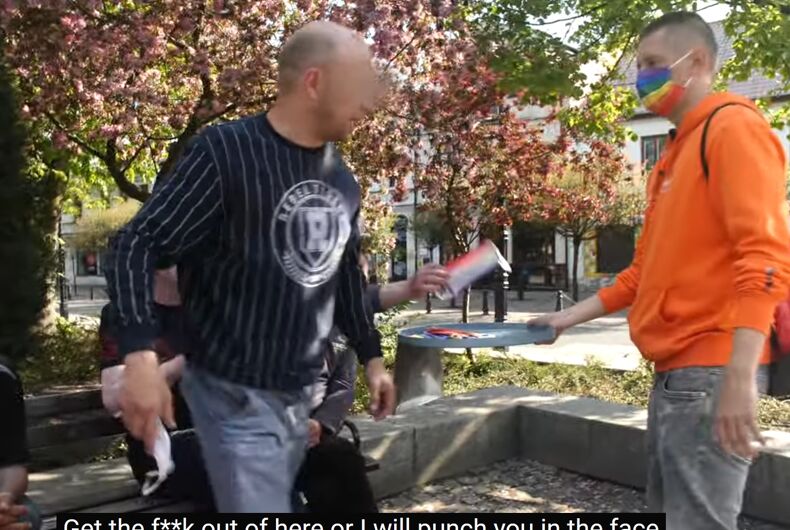 A man gets up and leaves when approached with the rainbow facemasks.Photo: Screenshot/YouTube

A Polish gay couple went to self-declared “LGBT-free zones” in their country to hand out rainbow face masks during the COVID-19 pandemic, hoping to promote tolerance.

Over the past year, one-third of Poland’s territorial areas and municipalities declared themselves LGBT-free zones, mostly in the southeast of the country. The movement, led by the Law and Justice Party (PiS), is meant to remove LGBTQ “propaganda” from public, which proponents of the measures see as “Western decadence” and believe LGBTQ people “threaten our identity, threaten our nation, threaten the Polish state.”

In April, gay couple Jakub Kwiecinski and Dawid Mycek handed out free rainbow face masks in Gdansk, a more open-minded city in the north of Poland. They got mostly friendly reactions from people who took the free masks.

Now they went to the other side of the country to the cities of Mordy, Trzebieszów, and Biała Podlaska, which have been declared “LGBT-free zones,” to hand out masks.

They got to a rough start in Mordy, as people walked away or told them they didn’t want a mask. Most of the people who walked away in the video didn’t explain why they refused. But later people were willing to accept the masks.

They also got a mixed reactions in the other two cities.

Only one confrontation is shown in the video, when they were in Biała Podlaska. They approached a group of men sitting in public and one of the men gets up and walks away, saying, “Get the f**k out of here or I will punch you in the face,” according to the English subtitles.

Kwiecinski and Mycek considered the trip a success because they “didn’t get hit.”

“It was a hard day, but we are extremely happy that so many rainbow masks will be worn in LGBT-free zones,” Kwiecinski said.