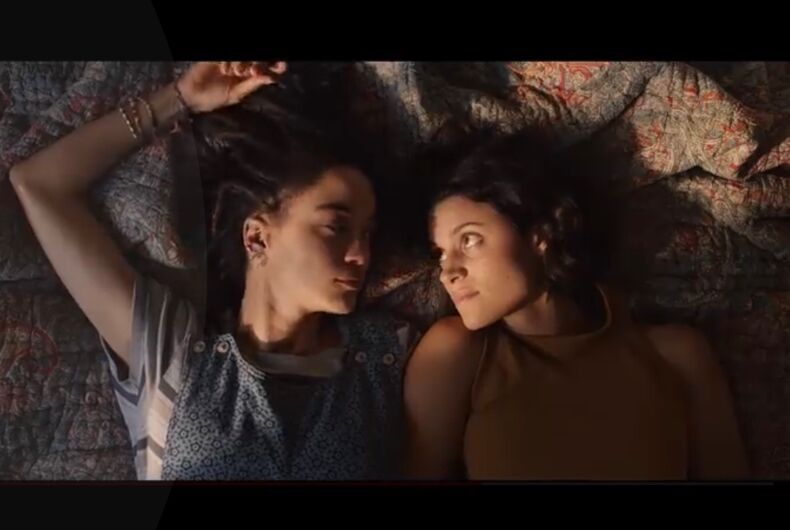 A lesbian couple sharing a look in a new Oreo ad in partnership with PFLAG.Photo: Screenshot

Beloved cookie OREO has announced its partnership with PFLAG, the largest LGBTQ organization in the country. With it, comes – for the first time – the unveiling of Rainbow OREO cookies.

Yes, there are packs of OREO cookies with assorted creme colors in the style of the Pride flag. They’re not for sale though – in fact, there is only one way to get them right now.

There are only 10,000 packs of Rainbow OREOs being produced. To get your hands on them, you’ll have to join their #ProudParent campaign.

They ask wishing participants to “share a photo of what allyship means to you” on either Instagram or Twitter, using the hashtags #ProudParent and #Giveaway while following and tagging @OREO before October 31. Only participants 13 years old or older and in the United States or Puerto Rico are eligible to receive them if they are chosen.

OREO has shown support for the LGBTQ community and teased the notion of a rainbow cookie before. A branch of OREO’s parent corporation at the time, Kraft Foods, posted a photo edited into a Pride-colored rainbow OREO online in 2012, which led to boycotts from the American Family Association and other anti-LGBTQ people. Kraft, however, stood by the posts.

That same year, Kraft’s snack division (which includes OREO) spun off into its own separate corporation, becoming Mondelēz International – but the new company has renewed its pro-LGBTQ efforts.

With the announcement, OREO also released a short film ad online. The 3-minute spot “highlights the true importance of family love, support, and affirmation,” they declared in its announcement.

Entitled “Proud Parent,” the video focuses on a lesbian couple, Amy and Jen. As Jen drives the couple to her family’s home, she seems clearly worried about how her family will receive Amy. When she arrives, Jen’s mom is welcoming but her dad doesn’t seem as excited to see them.

Throughout the next few scenes, we see Amy interacting and getting to know Jen’s family, including Jen’s sister, who is in an opposite-sex relationship and has a son. Jen watches her father become more social and affectionate with Jen’s sister’s partner, but Amy doesn’t seem to mind and tries to cheer her up with a bike ride and eating Oreos.

Later, when Jen and Amy are bringing in groceries and drop a bag, the couple catches the attention of a glaring neighbor. Jen’s father notices, but does not say anything. Later that night, he walks in on Jen and Amy watching videos of Jen and her father when she was younger. He remains distant, simply saying good night and walking away.

The next morning, Jen and Amy wake up to find Jen’s dad outside. When they go to see what he’s doing, they find that he’s painted the fence in the front of their yard like the Pride flag.

“Did I do it right?” he asks earnestly.

Finally, he hugs Jen and tells her, “I love you,” before hugging Amy and asking her what she thinks.

Along with the film came four education guides from PFLAG – one for “Going Home”, one for “LGBTQ+ People of Color”, one for dealing with “Negative Reactions”, and one for “Family Affirmations.”

“The #ProudParent platform is our partnership with OREO, aimed at empowering and inspiring parents, families, and allies of to come out in loud, public support,” PFLAG stated in their announcement, “because every time a parent comes out in support of their child they inspire others to do the same – making the world a more accepting, affirming, and compassionate place.”

Historical photos of men in love: The couples who were bold

Meet Jessica & Kayla Weissbuch: The wives who made LGBTQ youth summer camp work in a pandemic