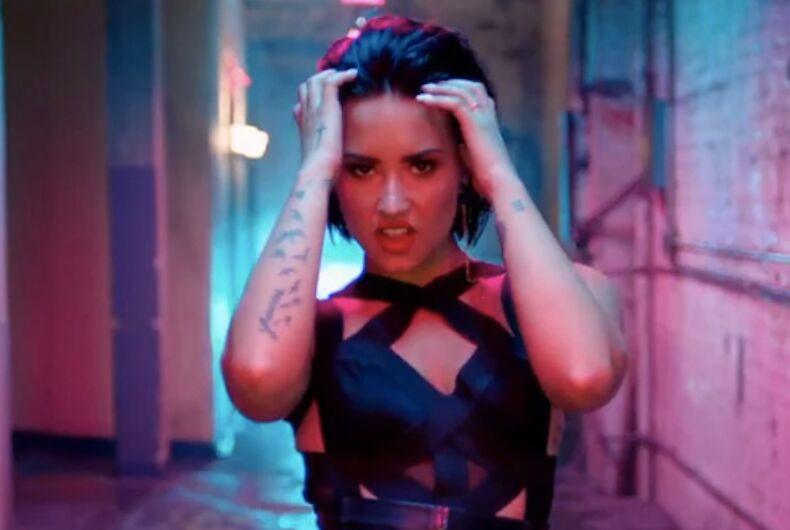 Pop singer Demi Lovato recently admitted that she realized she was queer after watching a scene of two girls kissing in the 1999 comedic teen drama Cruel Intentions.

“It was definitely when I was young and should not have been watching Cruel Intentions,” she said, “but I did and it was that scene where they made out on the park lawn. I was just like ‘Oh wait a minute — I really like that, I wanna try it.’ And then when I was like 17. I did get down with that, and that’s when I knew.”

In the movie, Gellar’s character, Kathryn, is a sinister wealthy teenager in New York who tries to sexually corrupt Blair’s character, a naive high schooler named Cecile. Kathryn teaches Cecile how to kiss as the two picnic on a lawn in New York’s Central Park.

The film is actually a modern reimagining of the 1985 play Les Liaisons Dangereuses (Dangerous Liaisons) which was also adapted into a 1988 American film, both of which were based on a 1782 French novel of the same name.

Later in the interview, Lovato told France, “I pretty much told all of my friends and my older sister (that I was queer) when I was 17. They all knew before I brought it to my parents and then to the public. Those were my three phases: Friends, parents, public.”

Though Lovato is known for her 2015 bi-curious anthem “Cool for the Summer”, she admitted to France that some of her earlier romantic songs were actually about women, even though some fans thought they were about men.

“I’m surprised that some of them didn’t figure out that some of the songs were for certain people,” Lovato told France. “I was sharing it with the world, yet I wasn’t being completely obvious with what I was talking about. Music was my safe space.”

In the past, the former Disney star has spoken openly about her struggles with drug addiction, eating disorders, self-harm and mental illness. She has cited bisexual singer Whitney Houston as one of her influences. She has also spoken out in favor of marriage equality in 2013, was named the L.A. Pride Parade Grand Marshal and lead performer for NYC Pride in 2014, and received the GLAAD Vanguard Award for making a significant difference in promoting equal rights for the LGBT community at the 27th GLAAD Media Awards ceremony in 2016.

Historical photos of men in love: The photo booth as a safe space