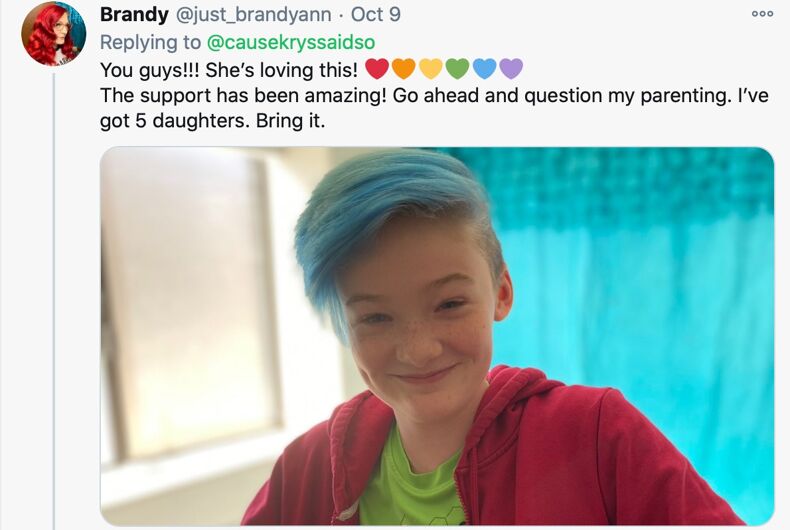 Fiona's mom is ready to rumble (and love her daughter)Photo: Twitter

11-year-old Fiona has gone viral after her foul-mouthed anti-MAGA “crime” spree got her in trouble. Fiona was writing on the sidewalks outside houses that had Donald Trump campaign signs in their yards and she got caught by one man who ratted her out to her mom.

But when Fiona’s sister took to Twitter to laugh about it, the story quickly took off and, after the show of solidarity for the pintsized politico, mom took to the site herself to declare that the girl “is no longer grounded.”

“YALL so APPARENTLY my sister has been writing things like BLM, ACAB, and fuck trump on the sidewalks infront of ppls houses who have trump signs and this dude put up a camera to catch who it is,” Fiona’s sister tweeted. “Imagine his surprise to find out it’s a little 11yr old lesbian w blue hair on a bike”

“My mom was HOLLLLERING when he came angrily to the door in his m*ga hat and mask explaining how he caught the ‘culprit’ of such crimes.”

After seeing the response, the next day her sister clarified, “Yes it was sidewalk chalk. She got a talking to about treating people with respect but applauded for using her voice. Words in themselves are not bad just the context which she got talked to about using fuck in that way.”

“She is still grounded for this, but my mom said it’s hard to keep her grounded with all of the support.”

And it didn’t take long for the update to hit. Fiona was getting a reprieve.

“Y’all did it,” she tweeted above a retweet from their mother.

“Based on the latest Twitter response, it looks like #princessfiona is no longer grounded,” she sent with the hashtag #thepeoplehavespoken

Of course, some Trump supporters and the usual suspects climbed in the thread to decry LGBTQ people or condemn the mom’s parenting. So icing on the cake, Fiona’s mom threw down a challenge with an update.

“Go ahead and question my parenting,” she tweeted. “I’ve got 5 daughters. Bring it.”

You guys!!! She’s loving this! ❤️🧡💛💚💙💜
The support has been amazing! Go ahead and question my parenting. I’ve got 5 daughters. Bring it. pic.twitter.com/mDailE26do

Vote as if your life depends on it: How the federal courts stack up, Trump v. Obama