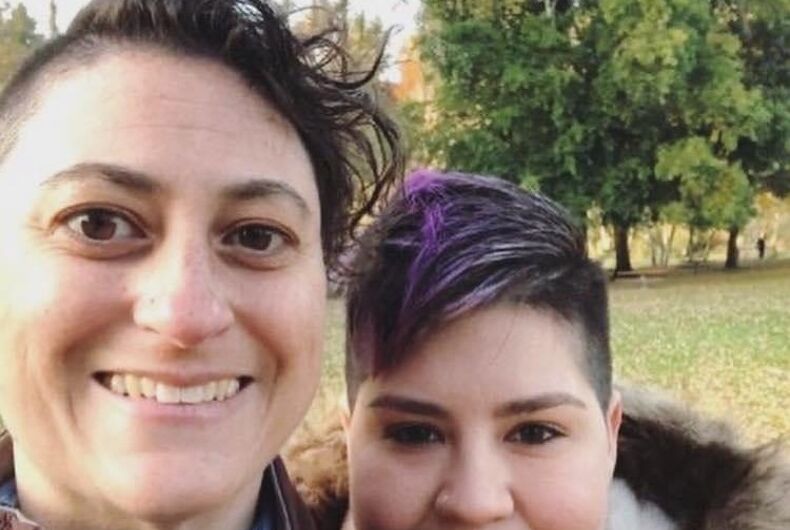 When Jessica and Kayla Weissbuch started Camp Brave Trails, they didn’t know that they were going to provide a lifeline for LGBTQ youth through a global pandemic.

“We just knew we had to make this shift” to a virtual camp, the wife-and-wife team told LGBTQ Nation, “because a lot of our campers hold their breath for camp all year round because it is one of the only safe and secure spaces for them to exist.”

Camp Brave Trails in southern California was a labor of love that the couple started in 2015 to provide that safe space for LGBTQ youth and also help them develop “natural leaders,” skills that are needed now more than ever.

“The impact on LGBTQ youth has been tremendous,” Coby Pfaff, the operations director at Camp Brave Trails, wrote when he nominated the Weissbuchs for LGBTQ Nation‘s Hero of the Year award.

He has seen firsthand the positive impact the camp has made on queer and trans youth: “Many campers have commented on how it has changed and even saved their lives. The leadership training gives these youth the tools and the courage to go back to their communities and build a better future – fighting for non-gendered bathrooms, creating high school GSAs, building clothing exchange programs for trans youth, and so much more.”

The Weissbuchs’ work was cut out for them this year. They had only five weeks to completely change the format for camp this year to a virtual, online camp, run through Zoom.

“We had to retrofit our staff training to meet the needs of an online camp vs in-person camp,” they said, explaining that they had to research software and learn about leadership activities that could be done online. “We had a lot of meetings internally and with campers and their families to figure out what they needed in this time.”

“We did all of this in five weeks.”

And they did as much as they could to help the campers make the most of their time at virtual camp. The Weissbuchs shipped boxes of supplies for projects to campers and staff to try to make camp during the pandemic like camp in previous years, complete with drag shows, cooking and poetry workshops, and workshops around identity.

“The most important thing we wanted to replicate was the cabin experience because this gives the campers the time to form close bonds with peers and also cabin councilors,” they said.

That fast and intense preparation paid off.

“From day one campers were fired up and ready to go,” the Weissbuchs said, adding that it wasn’t hard to maintain the energy level this year because the youth were “sick of being home alone with nothing to do.”

“There were several moments when we saw that online camp was helping,” they said. “One of them was our drag show, we had an amazing turnout and campers are still talking about it.”

“In in-person camp, our closing campfire is one of the most impactful programs we have. It was amazing because we saw almost the same reaction from our campers from our on-line closing campfire. They expressed how important camp was for them this year and how being able to connect with peers as well as the cabin councilors in a time of isolation was so important to them.”

They needed to make camp happen this year because many of their campers depend on it to provide a safe space, as well as because of the positive impact their campers make in their communities throughout the year. They said that it was “stressful” to put together a program so quickly.

“We usually take months and months to create quality programs for our campers,” they said. “Knowing we only had five weeks to put this together was nerve-racking.

Even with all the work they put into making this year at camp as powerful as any other, the Weissbuchs said that it “felt more like a triumph than stressful.”

The Weissbuchs said that they were “honored” to be nominated for LGBTQ Nation‘s Hero of the Year for making a difference in LGBTQ youth’s lives during the pandemic.

The first Rainbow OREO cookies are here. There’s only one way to get them.