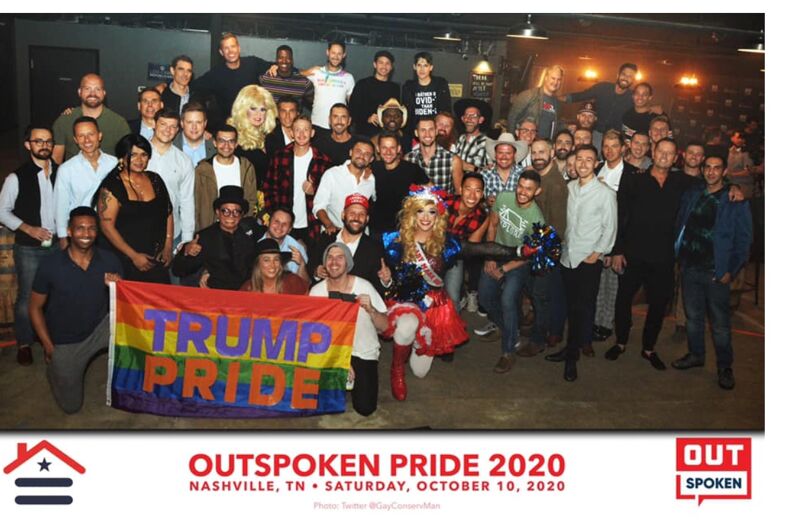 LGBTQ Trump supporters gathered together to flout coronavirus prevention measures in support of the PresidentPhoto: Screenshot

Approximately 50 LGBTQ Republicans from across the country gathered in a Tennessee distillery to plot election strategy. None of the attendees wore masks in photos of the event posted online.

The Trump supporters crowded together for a group photo and other pictures show them dancing in the indoor space. Both activities break social distancing prevention guidelines and could spawn the latest COVID superspreader event caused by GOP gatherings.

Out former ambassador to Germany, Richard Grenell, also attended and is shown posing for photos with attendees. Grenell, who has a reputation as a Twitter troll, has been leading the charge to woo LGBTQ voters for Trump.

The Trump administration has been the most viciously anti-LGBTQ in history.

Charles Moran, the Managing Director of Log Cabin Republicans, emailed members a breathless report on the event, billing it as “a huge success and almost certain to become an annual event.”

“At LCR, we believe that it’s critical we all work together to take on the radical left and the ‘cancel culture’ antics going into this election cycle,” he wrote.

While Moran’s comment apparently refers to the standard right-wing “cancel culture” bugaboo that anyone who expresses a contrary opinion will automatically lose their livelihood and safety, former Log Cabin supporters and leaders are privately saying they would like to “cancel” Moran’s influence on the group.

“Log Cabin has become little more than a tool to condone racism and cruelty lately,” one former board member told LGBTQ Nation. “Instead of supporting our community, they only support Donald Trump.”

Shortly before being diagnosed with the coronavirus, Trump hosted an event at the White House to announce his choice to nominate religious extremist Amy Coney Barrett to the Supreme Court to replace liberal lion Ruth Bader Ginsburg. Attended by dozens of maskless Republicans and conservative activists, the event turned into a superspreader event, infecting several politicians, government officials, and White House staff.

Trump’s campaign rallies, held during a pandemic without regard to prevention precautions, have also repeatedly spread the virus. The President apparently held events after being diagnosed and put White House staffers’ health in jeopardy by returning to the residence early from the hospital and refusing to wear a mask.

Trump has returned to the campaign trail, offering to “kiss all the guys” in the audience to prove he is “immune” to coronavirus earlier this week.

Moran reports that Grenell convinced President Trump and Vice President Mike Pence to call the event’s organizers to congratulate them on hosting the event. Pence, one of the most viciously anti-LGBTQ politicians in America, is also in charge of the country’s coronavirus response.

LGBT conservatives from across the nation gathered for an unforgettable weekend in Nashville. “I’ve never been in a room with so many gay conservatives,” one attendee commented.

“This means the world to so many of us,” said another. Check out the photos! https://t.co/Tl9TYE0rsi

Meet Jessica & Kayla Weissbuch: The wives who made LGBTQ youth summer camp work in a pandemic