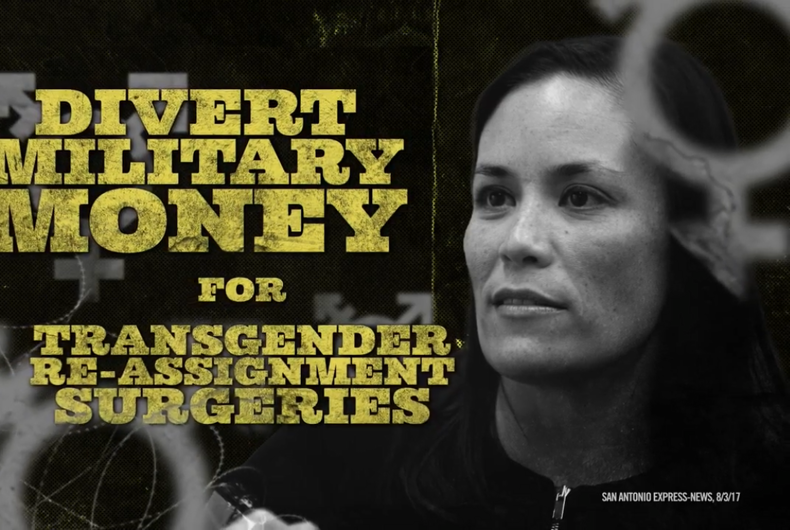 A still from "Death Sentence", the NRCC's political ad attacking Gina Ortiz-Jones and promoting the claim that she wants to "divert military money for transgender re-assignment surgeries."Photo: Screenshot

As more and more LGBTQ people run for office – with more than 1,000 LGBTQ candidates running for office this election cycle – more and more political groups try to use their identities against them.

It appears the National Republican Congressional Committee (NRCC) wants to corner that market.

Related: Gina Ortiz Jones wants to be the first out Congressperson from Texas

The NRCC’s sole purpose is to get Republican candidates elected to the House of Representatives. That makes the race to retain control of the 23rd District in Texas extremely important. The seat is currently held by Rep. Will Hurd. In 2018, he was within 1,000 votes of losing to his challenger, Gina Ortiz Jones, in the most expensive congressional race in Texas’ history.

Now, Ortiz Jones, who is out, is running again – and Hurd has subsequently declined to run again, citing his desire to serve his country “in a different way.” If they were to lose the district at this moment, Republicans would not have any Congressmembers from any districts along the U.S.-Mexico borders.

Ortiz Jones already has familiarity with the voters in this race and additionally has endorsements from the likes of former President Barack Obama and current Presidential nominee Joe Biden. With this in her favor, the NRCC has resorted to suggestive, anti-LGBTQ rhetoric to try to give the upper hand to the Republican candidate, Tony Gonzales.

A new 30-second ad released by the NRCC deems Ortiz Jones as “too liberal for Texas.” It’s entitled “Death Sentence,” suggesting that electing Ortiz Jones would be disastrous for the state’s oil industry. It also puts her side by side with Nancy Pelosi and Alexandria Ocasio-Cortez, even alleging that Pelosi “pays” Ortiz Jones’ bills and that she would “pay her back” if elected.

As many conservatives have done since her 2018 campaign, the NRCC refers to Ortiz Jones as just “Gina Jones”, refusing to use her full name. They erase her Filipina heritage and claim she uses it for pandering to the district’s Hispanic-heavy population.

But the ad’s most outlandish claim is that Ortiz Jones will “divert military money for transgender re-assignment surgeries,” quickly citing an unnamed article from the San Antonio Express-News on August 3, 2017.

The only article on that day related to Ortiz Jones was in the print edition of the paper, entitled “Hurd draws a Democratic rival for Dist. 23.” It simply notes that she was a Iraq war veteran, and that she was challenging Rep. Hurd – it does not support or relay any evidence of the claim listed in the ad.

The NRCC further claims on its website that Ortiz Jones “supported using taxpayer money to pay for gender reassignment surgery.”

It also puts a picture of Ortiz Jones with her partner, Ana, right before saying, “The contrast between Tony Gonzales and Gina Jones couldn’t be clearer.” Gonzales is married to a woman and has five children.

Further, the website cites three years of social media posts by Ortiz’s partner as “hit” evidence on the candidate. Despite trying to assert that Ortiz Jones is unfit because she “lives in Washington, D.C., not Texas,” multiple of their cited posts include the pair while they’re in San Antonio.

Still, despite going against their own claim, they continue to cite these posts as “evidence” and use the opportunity to describe Ana as “her ‘girlfriend’,” in quotations as if to question the relationship.

My opponent is airing attack ads questioning my commitment to our community.

I'm a San Antonio native, Air Force veteran, and I spent 13 years of my career on a military base. As I said during our debate, I'll always fight for our bases, jobs, and families in #TX23. pic.twitter.com/rbcDJaQznN

The NRCC similarly attacked Jon Hoadley, who is running for a Congressional seat in Michigan. They amplified claims that he was a “meth-using, pedo sex poet” in ads, using misleading excerpts from blog posts in his early 20s as evidence. Hoadley’s posts were actually part of discussions on how to deter people from using meth and sexualizing children.

“The reality is as a state legislator, I have a strong track record fighting for children, fighting against human trafficking and standing up for survivors of domestic violence and sexual assault,” Hoadley told LGBTQ Nation in an exclusive interview. He also revealed that he was a survivor of sexual assault himself.

This tactic was also employed by a South Carolina GOP politician’s ad released last week. In the spot, she falsely claims that her incumbent opponent worked with Nancy Pelosi to close a South Carolina military training site. “[Rep. Joe] Cunningham and Pelosi passed a law requiring transgendered [sic] equality in the military, a liberal mandate that will close Parris Island,” they allege.

In reality, the Marine Corps themselves are considering closing the training base in favor of a new updated consolidated facility instead of maintaining multiple older ones.

Similar attacks on other LGBTQ politicians, such as Alex Morse and Ritchie Torres, have spurred outrage, especially from the LGBTQ Victory Fund, which advocates for out politicians and their supporters.

“The national fundraising arm of the Republican Party has declared war on LGBTQ candidates this election cycle – and homophobia and transphobia are their weapons of choice,” former Houston mayor and Victory Fund President Annise Parker said in a statement.

Calling the NRCC’s attack on Ortiz Jones “despicable,” she continues on to say “their appeals to bigotry – especially when aimed at LGBTQ people who fought for America – is the ultimate evidence that winning elections is more important to them than the values most Americans hold.”

Parker also calls out the Republican candidates for not denouncing the attacks.

“That they accept bigotry for a perceived political gain is a reflection on their character and will not be forgotten.”

Editor’s Note – This article was updated to include information regarding the San Antonio Express-News article cited by the NRCC in regards to Gina Ortiz Jones’ policy proposals. The article in question, “Hurd draws a Democratic rival for Dist. 23”, does not mention transgender people or any kind of military policy.