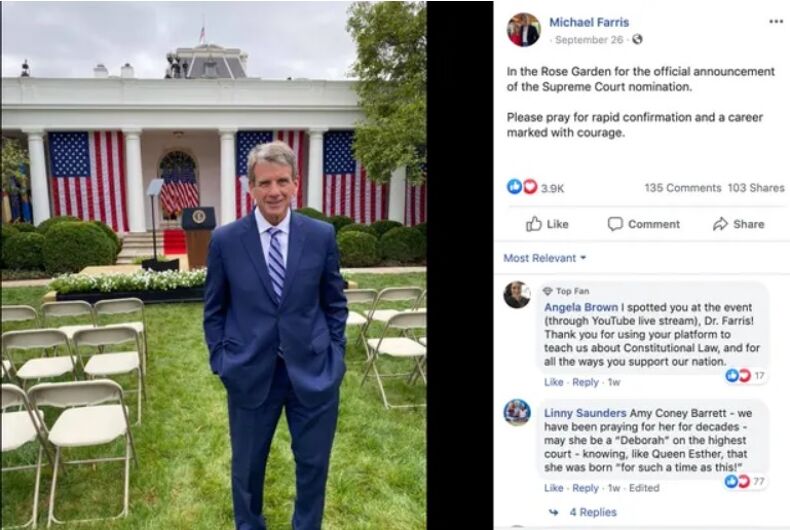 The leader of an anti-LGBTQ hate group attended the infamous September 26 gathering in the White House Rose Garden where President Donald Trump announced his nomination of Amy Coney Barrett for the Supreme Court. At least 11 attendees have been diagnosed with the COVID-19 virus, including Trump and his wife, Melania.

Michael Farris, the CEO of the anti-LGBTQ Alliance Defending Freedom (ADF), posted a photo on Facebook at the Rose Garden event.

“In the Rose Garden for the official announcement of the Supreme Court nomination,” he wrote. “Please pray for rapid confirmation and a career marked with courage.”

ADF is an SPLC designated hate group that is involved in a number of cases opposing LGBTQ equality. The group has fought in the past for the criminalization of homosexuality, with attorneys associated with the organization saying that “same-sex sodomy is a distinct public health problem” and calling LGBTQ activism “the new promotion of pedophilia.”

Today, the ADF says that they’re not a hate group and that their “limited engagement in [LGBTQ issues] was based on our belief that marriage between one man and one woman is the best institution for human flourishing.”

Barrett has deep ties to the organization. At her 2017 Senate confirmation hearings for federal court, she was asked about her involvement in the Blackstone Legal Fellowship training program for Christian law students, which is funded by ADF. Barrett received payments from the group five times since 2011.

“I’m invited to give a lot of talks as a law professor,” Barrett told the Senate. “I don’t know what all of ADF’s policy positions are, and it has not been my practice to investigate all of the policy positions of a group that invites me to speak.”

She even claimed that she, a future federal judge, just had no idea who was going to hand her the first check.

“I actually wasn’t aware until I received the honorarium and saw the ADF on the check, or maybe when I saw an email and saw the signature line. But, yes, ADF is the organization that sponsors the Blackstone.”

She did not say if she was also unaware of who would be signing the next four checks.

ADF’s Farris told The Guardian that, despite attending the event for Barrett, he “has never met Amy Coney Barrett in any capacity.”

Rightwing groups have been cheering Barrett’s nomination. In 2015, just after the Supreme Court legalized marriage equality in all 50 states in the Obergefell v. Hodges decision, she signed a letter supporting the Catholic Church’s teachings “on the meaning of human sexuality, the significance of sexual difference and the complementarity of men and women; on openness to life and the gift of motherhood; and on marriage and family founded on the indissoluble commitment of a man and a woman.”

“You can be certain that LGBT extremists will be doing everything in their power to block this confirmation,” wrote Brian Brown of the rightwing organization National Organization for Marriage (NOM). “It’s imperative that we be on the front lines fighting for control of the Supreme Court by demanding that Republicans support President Trump’s nominee.”

ADF has recently been involved in litigation to ban transgender girls from competing in high school sports, keep conversion therapy legal, and to create expansive religious exceptions to anti-discrimination laws.

Out Colorado governor will pardon thousands convicted of marijuana charges