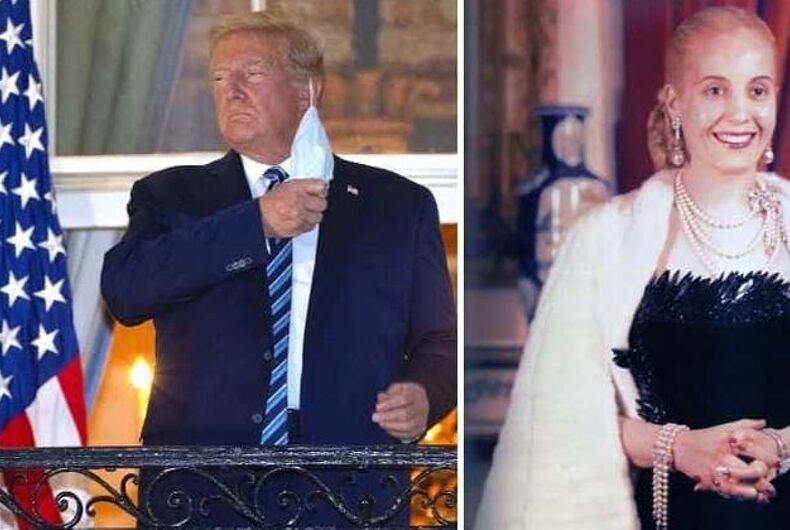 While Madonna’s star turn as Eva Peron has been widely considered one of the worst, Donald Trump escaped the hospital last night to stage his own triumphant return to the White House. Huffing and puffing, the COVID-infected president whipped off his mask and climbed to the balcony for a photo op as he waved and gave the thumbs up to supporters.

Patti LuPone, who starred in the original Broadway production of Evita and made the musical a hit, quickly noted Dear Leader’s remarkable reenactment of the famous balcony scene. The 71-year-old award-winning actor’s wry response almost broke Twitter and set the standard for all the inevitable comparisons.

Related: The musical ‘Gypsy’ has a killer queer secret hiding in plain sight

“I still have the lung power and I wore less makeup,” she tweeted along with a photo of the president standing on the balcony looking frail and licking his lips. “This revival is closing November 3rd.”

I still have the lung power and I wore less makeup. This revival is closing November 3rd. pic.twitter.com/vRQ4LepACv

Trump has previously said that his favorite musical is Evita and that he had seen it multiple times when LuPone was on stage as the late First Lady of Argentina.

I note with interest that he has said his favorite movie is CITIZEN KANE and his favorite musical EVITA. I don’t think most other viewers took either as roadmaps. https://t.co/qNC7ewZLD8

The Evita comparisons quickly took over the web, and, of course, Madonna was quickly dragged into the snarkfest.

Congratulations to Madonna who is no longer the shittest Evita. pic.twitter.com/woWnM8Lb2p

You guys— this remake of Evita looks terrible. 🙄 #Covita pic.twitter.com/qxP6UOS53q

The Worst Photo-op Ever
Our American Evita

Needless to say, Trump checked himself out of Walter Reed Medical Center and returned to the White House very early. Taking off his mask and endangering even more staffers and White House employees is on-brand for Trump, but not medically – or ethically – wise.

Trump has pointedly ignored medical advice (and ethics) since the start of the coronavirus pandemic that has claimed over 200,000 American lives.