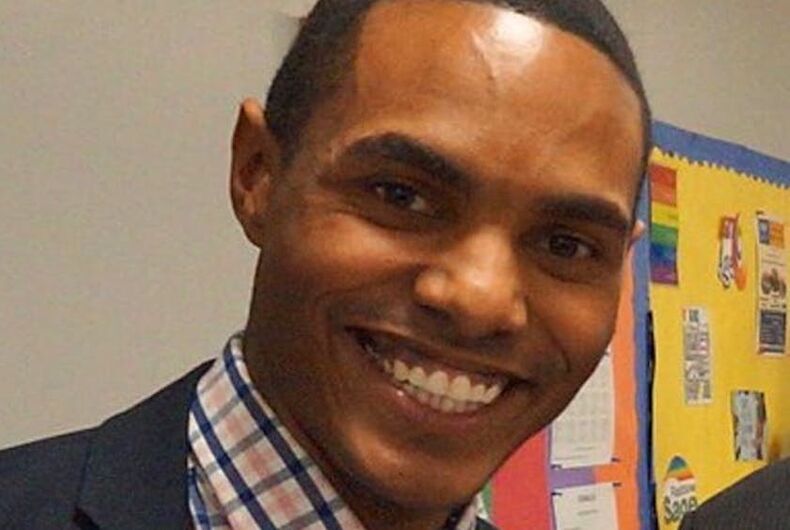 In what is looking to be a landslide victory, gay congressional candidate Ritchie Torres is on his way to defeating his notoriously anti-LGBTQ opponent—a man he was told he could never beat.

The final tally of Tuesday’s Democratic primary in the South Bronx won’t be ready for a week, but as long as the numbers hold, Torres will declare a 2-1 victory over fellow City Council member Ruben Diaz Sr., a man Torres called “a Trump Republican masquerading as a Democrat.”

Torres, 32, is currently leading the pool of twelve primary candidates with 30.5% of the vote. And in what is considered the most Democratic district in the nation, a primary victory is pretty much a direct road to Washington D.C.

On top of defeating a man who voted against marriage equality and has made multiple disparaging comments against the LGBTQ community, Torres will also make history as the first out LGBTQ Afro-Latino Congressperson in the nation.

A victory over Diaz, let alone a massive one, wasn’t a given when Torres launched his campaign.

He once told the New Yorker that Diaz, who has held elected office in the borough for eighteen years, has “the most powerful name in the Bronx.” His son of the same name has also spent the past decade as the Bronx borough president.

While Ruben Diaz Jr. does not hold the same conservative views as his father, the Torres campaign feared the two men could be conflated at the polls. Diaz Jr. supports LGBTQ rights.

“Many said this race could not be won,” Torres said. “That Ruben Diaz Sr., who is a larger than life figure in Bronx politics, could not be beat, and that an openly LGBTQ candidate like myself had no business running and no chance of winning.”

And yet, Diaz, 77, currently holds only 14.8% of the vote, a number that clearly displeased him when he refused to speak to a reporter on election night and instead stormed out of the room.

An angry Rubén Díaz doesn’t want to talk to NY1’s @JuanMaBenitez as he leaves his election night event. #NY15 pic.twitter.com/bbOugshdgD

Torres feels vindicated, he said. A victory over Diaz “represents as strong a repudiation of the politics of pain and fear as I could have imagined.”

Besides, an LGBTQ Congressman from the South Bronx is something in and of itself to celebrate, Torres added.

“It’s one thing to have LGBTQ representation in the traditional gayborhoods of New York City. It’s something else to have it in the South Bronx, in the place you would least expect. That to me represents a new kind of victory for representation in politics.”

Torres believes this victory also shows that voters saw themselves in him.

Torres’ district is not only one of the bluest districts in the nation, but it is also one of the poorest. He has said he is committed to breaking the cycle of poverty through first and foremost working toward affordable housing, a fight he has already taken on in his role on the New York City Council.

As the results of the primary came in, Torres choked back tears and thought of his mother.

“This victory belongs as much to her as it belongs to me,” he said.

Councilman @RitchieTorres says it's too early to declare victory in his congressional race, but he does have an early lead. He told @JuanMaBenitez it would be the honor of his life to represent the Bronx. "It's my home." #NY1Politics pic.twitter.com/grY8KfDref

As for what’s next, Torres said he plans to hit the ground running in fighting for his community.

“I’m not a miracle worker,” he said. “I cannot wave a magic wand over the city and solve every problem affecting the South Bronx. But I’m a worker. No one is going to fight and work harder for the South Bronx than I will.”

Oppose LGBTQ rights? Trump campaign advisor says you should vote for him