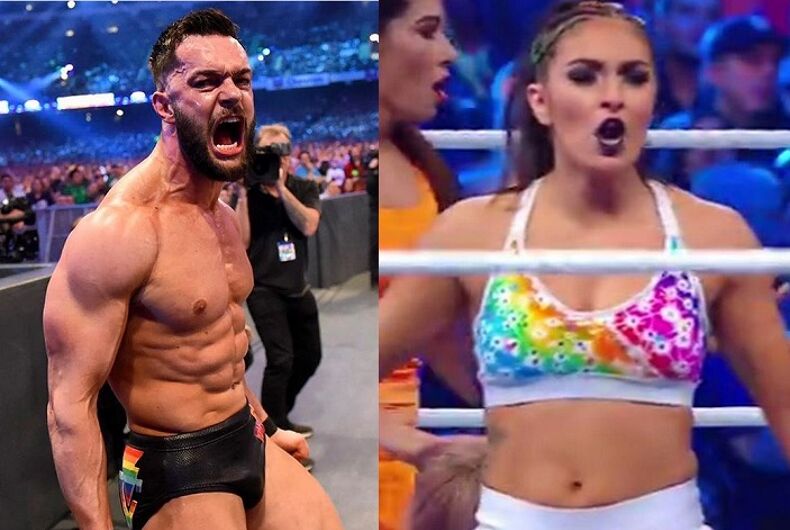 One of the most visible changes in how LGBTQ people are perceived is how queer athletes and fans are being welcomed and celebrated in professional sports.

Clubs are hosting Pride night events, hawking rainbow merchandise, donating to charities, and as more and more athletes come crashing out of the closet, they’re doing it in a big way.

Sonya Deville became the first out lesbian to participate in Wrestlemania and to honor the moment, she wore a rainbow costume.

She said on Instagram that she was wearing a rainbow costume as a message to LGBTQ people: “I’m representing y’all.”

Sonya has been out for years, and she said that she hopes she can inspire others to come out.

“If I can help people in this process and be a voice to people who might be intimidated of coming out themselves or are scared to or think that it’s wrong and they see me doing it in front of pretty big people in the WWE world, hopefully it will give them the courage to do it,” she said.

Irish World Wrestling Entertainment (WWE) star Finn Balor made a memorable entrance in his first Wrestlemania in 2018, flanked by LGBTQ activists and sporting rainbow branding on his tight black shorts. Fans wore T-shirts with the logo and tagline “Bálor Club for Everyone.”

Balor is a straight ally.

i've been watching wwe for 2+ decades and for so much of that time it would be just UNTHINKABLE for a wrestler to have something as simple as that finn balor LGBTQ pride entrance, and it makes me a tad emotional to see it now

This map shows LGBTQ protections worldwide. It’s even worse than it looks.