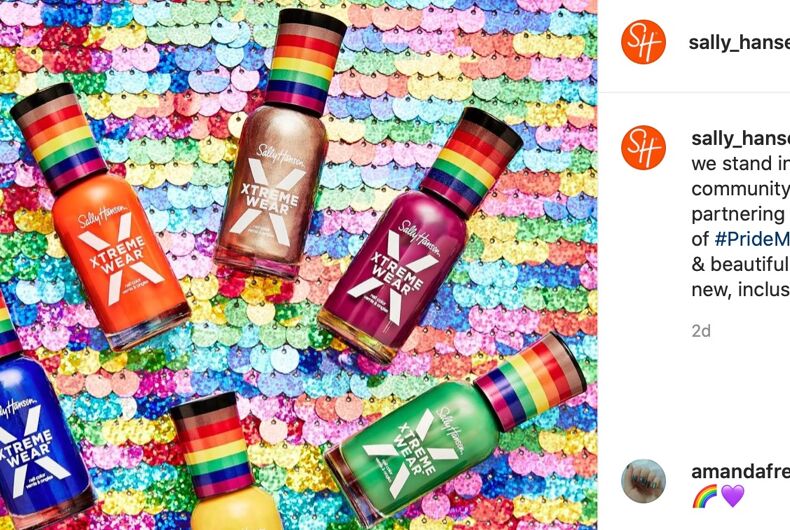 Sally Hansen has announced a new line of nail polish honoring the updated version of the Pride flag that includes brown and black stripes.

The eight bold Pride shades in the XTREME WEAR collection all come with caps with the rainbow flag on them.

Related: Has Pride become polarizing inside the LGBTQ community?

The company has partnered with GLAAD on the product and made a donation to the organization as well.

Today, and everyday, we stand in solidarity with the LGBTQ community 🌈. We’re so excited to be partnering with @GLAAD again ahead of #PrideMonth 🏳️‍🌈🌈 with a new bold & beautiful collection inspired by the new, inclusive flag 🌈. #LoveIsLove

The city of Philadelphia first approved the variation of the rainbow flag with the brown and black stripes for Pride in 2017 to recognize racism and discrimination faced by LGBTQ people of color in the city. That version of the flag faced some controversy, but some people liked it and it is often used to show Pride outside of Philadelphia.

The Pride flag was the brainchild of Gilbert Baker, who created the iconic design in 1978. The flag initially had eight stripes, each one symbolizing an aspect of the movement. These included hot pink for sex, red for life, orange for healing, yellow for sunlight, green for nature, turquoise for magic and art, indigo for serenity, and violet for spirit.

One of those initial colors proved to be difficult: the hot pink. When moves were made to have the flag mass-produced via the now-defunct Paramount Flag Company — a long time employer of Baker — hot pink was not a standard fabric they had on hand.

Hot pink would not be the only casualty.

When the 1979 Gay Freedom Day parade — a precursor to modern parades of today — was being planned, organizers wanted to line Market Street in San Francisco with the banner. Having seven stripes proved problematic, as one stripe would end up obscured by the pole itself. Turquoise was removed to make the design symmetrical, and indigo shifted to the royal blue on the flag today.