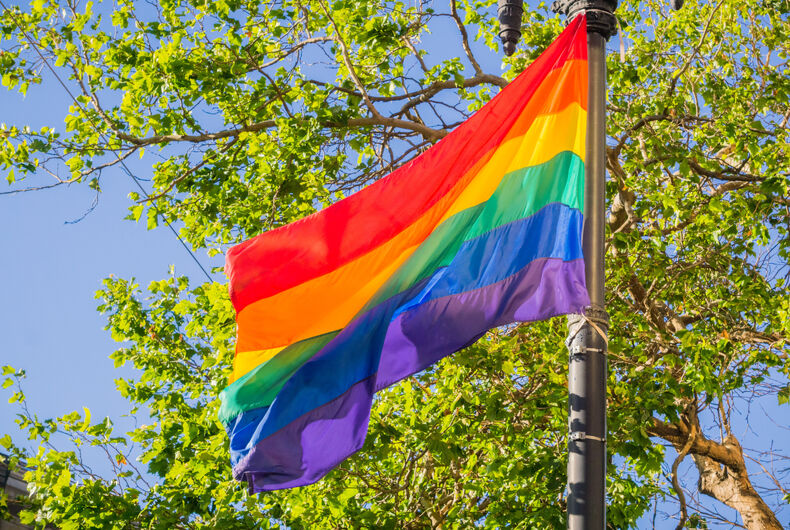 There’s one symbol that has risen over all others for the LGBTQ community: the rainbow flag, and more than ever it has become synonymous with our community and our struggles. How did this become the symbol of the community, and how has it changed?

The pride flag was the brainchild of Gilbert Baker, who created the iconic design in 1978. Working with James McNamara, Lynn Segerblom, and some 30 volunteers, they dyed and sewed the fabric for a pair of flags to adorn the flagpoles at UN Plaza in San Francisco’s Civic Center.

Baker, who described himself as a “geeky kid from Kansas,” was honorably discharged from the Army in the early 1970s, settling in San Francisco and getting involved in local causes. As part of his activism, he was often called upon to help create banners for both gay rights and anti-war marches.

The two initial designs included a more typical rainbow design and another with a field of stars akin to the American flag. Both of these designs may have been inspired in part by the patriotism fueled in the bicentennial two years before.

“I thought of the American flag with its thirteen stripes and thirteen stars, the colonies breaking away from England to form the United States,” Baker wrote in an as-of-yet unpublished memoir on the Gilbert Baker website.

“I thought of the vertical red, white, and blue tricolor from the French Revolution and how both flags owed their beginnings to a riot, a rebellion, or revolution. I thought a gay nation should have a flag too, to proclaim its own idea of power.”

The flag was also intended as a replacement for another LGBTQ symbol: the pink triangle. Many, Baker included, did not like the symbol, which has its roots in Nazi oppression of gay men and transgender people in concentration camps.

“Adolph Hitler conceived the pink triangle during World War II as a stigma placed on homosexuals in the same way the Star of David was used against Jews,” said Baker. “It functioned as a Nazi tool of oppression. We all felt that we needed something that was positive, that celebrated our love.”

The flag initially had a total of eight stripes, each one symbolizing an aspect of the movement. These included hot pink for sex, red for life, orange for healing, yellow for sunlight, green for nature, turquoise for magic and art, indigo for serenity, and violet for spirit.

One of those initial colors proved to be difficult: the hot pink.

When moves were made to have the flag mass produced via the now-defunct Paramount Flag Company — a long time employer of Baker — hot pink was not a standard fabric they had on hand.

Hot pink would not be the only casualty. When the 1979 Gay Freedom Day parade — a precursor to modern parades of today — was being planned, organizers wanted to line Market Street in San Francisco with the banner. Having 7 stripes proved problematic, as one stripe would end up obscured by the pole itself. Turquoise was removed to make the design symmetrical, and indigo shifted to the royal blue you see on the flag today.

The flag’s stripes, even today, have meanings attached to them, with red for life, orange for healing, yellow for sunlight, green for nature, blue for harmony, and purple for spirit.

Of course, other myths have sprung up surrounding the flag, the strongest of them being a link between the design and the song “Over The Rainbow,” sung by Judy Garland in The Wizard of Oz in 1939.

While the connection between a rainbow flag and Garland’s hit may seem clear, the rainbow design was chosen not as a link to the anthem, but from a Cow Palace dance party.

As Baker danced with friends at the venue, fueled by both the energy in the room and perhaps an amount of illicit substances, he and his friend Cleve Jones noticed the wild diversity of the crowd.

“Dance fused us, magical and cleansing. We were all in a swirl of color and light. It was like a rainbow,” said Baker. “A rainbow. That’s the moment when I knew exactly what kind of flag I would make.”

“Over The Rainbow” may not have been the source of the design, but Garland is forever tied to the LGBTQ rights movement in other ways. Her funeral took place just a day before the Stonewall rebellion, and the singer remains a long-time gay icon.

Baker himself did not mind the connection: he, like the fictional Dorothy Gale, hailed from Kansas.

The pride flag wasn’t the only one Baker designed. Aside from scores of other banners for the movement over the years, he created banners for the Democratic National Convention and even Super Bowl XIX. Yet the rainbow flag would be something he would return to time and time again.

In 2003, for the 25th anniversary of the banner, he even helped create a 1 1/4 mile long version of the flag, which spread along the entire length of Duval Street in Key West, Florida. For that version, too, all of the eight original stripes were included.

The flag has seen changes beyond Baker as well over the years, with a black stripe added at the bottom of the flag, symbolizing the need to find a cure for AIDS, a rainbow heart flag designed to promote marriage equality, and versions with a white and pink triangle to promote the inclusion of transgender people.

The most well known variant came out of Philadelphia in 2017, with a black and brown stripe added to the top to promote racial inclusion.

“In 1978, artist Gilbert Baker designed the original rainbow flag,” stated the More Color More Pride campaign, which added the stripes. “So much has happened since then. A lot of good, but there’s more we can do. Especially when it comes to recognizing people of color in the LGBTQ+ community. To fuel this important conversation, we’ve expanded the colors of the flag to include black and brown.”

The rainbow flag also led to many other striped banners within the LGBTQ community, such as the blue, black, and white leather pride flag, the light blue, pink, and white trans pride flag, as well as many others.

Meanwhile, the original still continues to inspire people around the world, no matter the number of stripes it has.