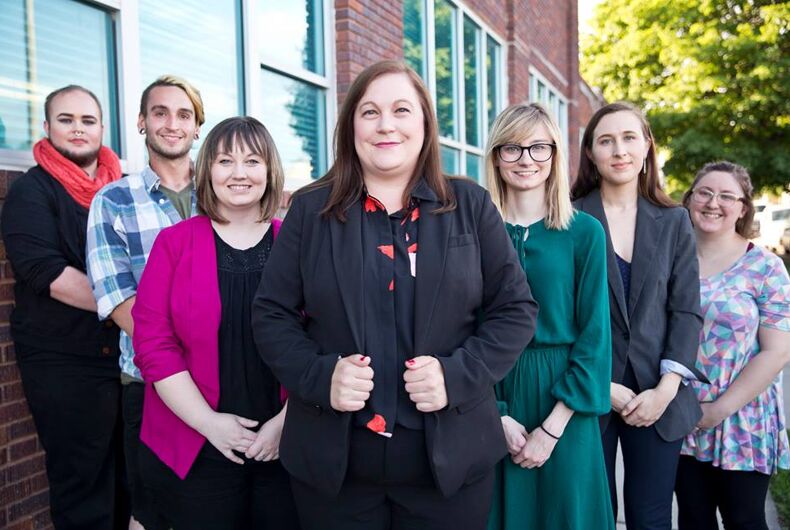 Democrat Jessica McClure is running for Congress in Nebraska as a progressive. So it’s natural that her campaign staff and volunteers reflect the diversity of the district – including its LGBTQ members.

But recognizing 21st century reality is apparently too much for at least one donor. After using a photo of herself with her staff in a campaign prospectus, McClure received a response from a donor withdrawing his pledge of support.

The reason: the photo showed “alternative folk” that would presumably harm the campaign’s chances.

The target of the donor’s discomfort seems to be Eric Reiter, McClure’s communications director. “I identify as non-birnary and generally like to present myself by wearing makeup,” Greitens told LGBTQ Nation.

McClure posted her response to the episode on Facebook.

“I have been faced with personal criticism since I started running for office based on the way I look and how I dress and the tone of my voice,” McClure wrote.

“At some point, I stopped caring about all these negative comments, and just decided to be myself. I would expect the same for my team. I want us to all be comfortable being ourselves.”

McClure is a scientist who went back to law school, receiving her degree in 2013. She and her husband moved back to Nebraska after her graduation. She’s the mother of a young daughter who has had health problems. The current incumbent’s vote to repeal the Affordable Care Act motivated her to run for Congress.

Granted, the district that McClure is running in is fairly conservative. Except for a single term in the mid-1960s, it’s been in Republican hands since 1939. Donald Trump beat Hillary Clinton by 20 percentage points in 2016.

Still, as McClure notes,  “I expect more from people who support the Democratic platform.”

While the donor is just one person, his comments do underscore the fact that it’s not just Republicans who have a problem with the LGBTQ community. Identifying anyone as “alternative” shows that there’s still a long way to go, even with Democrats.

The history of the iconic LGBTQ rainbow flag

We are the American majority & we will never surrender