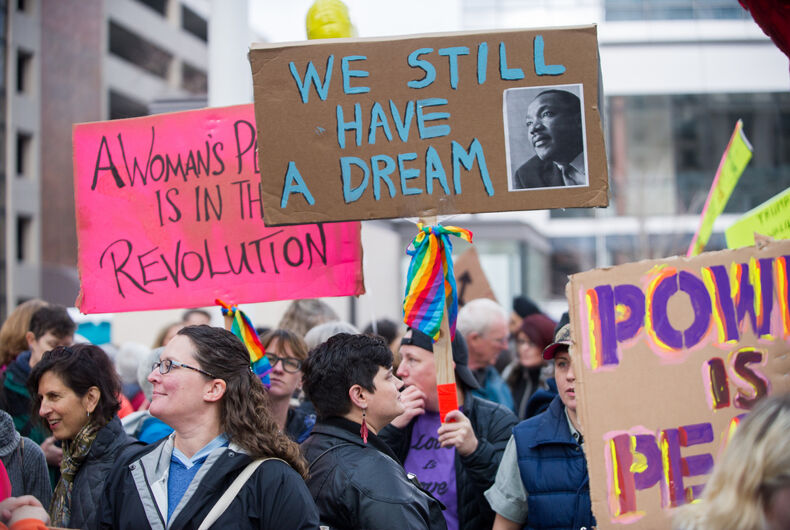 When I was in high school, abortion was a crime in New York and good people–including a whole cohort at the Judson Memorial Church–helped women find safe abortions. When I was in grade school, African Americans in the South were, for the most part, not even allowed to vote but they were well into a movement that transformed the heart and soul of the nation.

We are in the midst of an enormous backlash and people are saying “it’s over” and “we’ve lost.”

WE HAVE NOT YET BEGUN TO FIGHT.

If abortion is once again made illegal, we will help women obtain them safely.

If the sodomy laws are reinstated, we will still make love with people of the same-sex.

If private businesses are allowed to discriminate, we will not patronize the businesses that do.

If benefits are taken away from us by this cruel and uncaring regime, we will take care of each other.

We will never bow down to the false gods that they worship.

We will never give respect to the government they have stolen from us.

We will work for the day when our country finally has a government worthy of its people and responsive to us.

They can spew all the racism they want, but they will only further isolate themselves and never earn anything but our contempt and pity–never our complicity.

When they shout their racism and sexism and homophobia, we will not be silent no matter how much temporal power they illegally acquire.

While they wallow in their bigotry, we will continue to build a society that embraces diversity and consigns their hatred to the dustbin of history.

When they pass evil laws, we will disobey them not matter how often an illegitimate court declares them constitutional.

THINK THEY HAVE DEFEATED US? THINK AGAIN. WE ARE THE AMERICAN MAJORITY AND WE WILL NEVER SURRENDER.