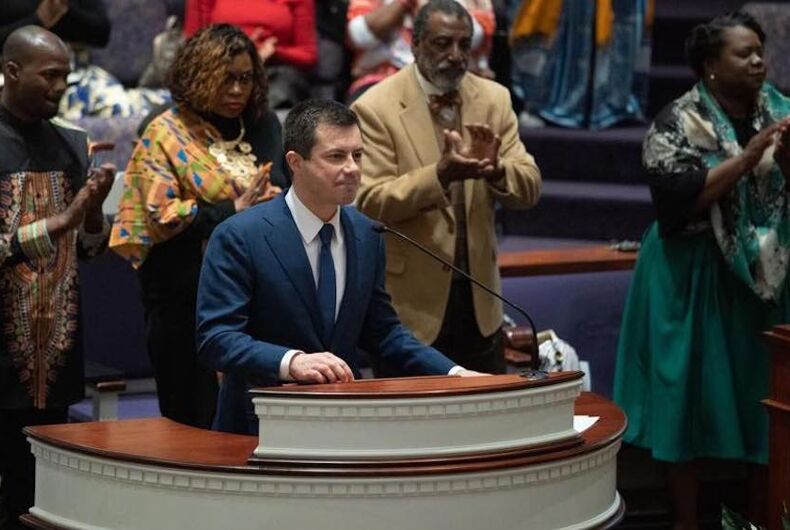 In a last-minute appearance in South Carolina yesterday before voters went to the polls, Pete Buttigieg said he felt “a wind at my back.” It turns out it was more of a shove.

Proving just how fluid the Democratic presidential primary race is, Joe Biden scored a decisive victory in South Carolina, putting him back in the race after poor showings in Iowa, New Hampshire and Nevada. Biden’s return as a viable candidate comes at the expense of Buttigieg, who is about to enter a stretch of primaries that aren’t looking favorable to him. Buttigieg’s single-digit finish in South Carolina raises serious questions about where his campaign will go from here.

Related: Stonewall, anyone? Pete Buttigieg blasted for his criticism of 1960s “revolutionary politics”

The South Carolina results weren’t a surprise. Biden had been gaining momentum, and his strong connection with black voters received a big boost when Rep. Jim Clyburn endorsed him, albeit critically.

But the results weren’t a surprise for Buttigieg either. He did well in Iowa and New Hampshire, two disproportionately white states. He has still struggled to win black support, and that problem was underscored in his poor showing last night since half the voters in South Carolina’s Democratic primary were African-American. The final poll before the vote showed Buttigieg with only two percent support among black voters.

Unfortunately for Buttigieg, the fourteen states that vote this coming Tuesday look more like South Carolina than Iowa. California, Texas, North Carolina, Arkansas are all more diverse, more complex states with more delegates at stake than ever before – and they are not Buttigieg strongholds.

In fact, Buttigieg’s campaign seems to already expect that he won’t win any state on Tuesday. “Super Tuesday is a tough day to be campaigning when you don’t have your own state up, and you’re going all over the country and you’re up against major media markets,” Austin Mayor Steve Adler, who supports Buttigieg, told Politico. “It’s also a hard thing to do immediately following the four early states, where he’s done well, so far.”

Instead, Buttigieg has been focused on areas within each state, such as rural areas, where he may do well as a moderate alternative to Bernie Sanders. The goal is to gain some delegates in hopes of keeping the campaign going.

Biden’s victory in South Carolina complicates that calculation. Buttigieg’s strategy was to score early victories that would position him as candidate to pick up the moderate torch from Biden when the former vice president faded. And it worked – while Biden was fading. Now, he’s back, and Sanders has proven a formidable candidate who has his own claim to momentum.

Buttigieg’s performance on Tuesday will determine the future of his campaign. Candidates need to hit a 15 percent threshold to qualify for delegates. If Buttigieg can’t hit that mark consistently, his campaign will face tough questions about whether he really has a chance to be the Democrats’ nominee for president. He may have to become content with having run one of this country’s most historical campaigns, and wait for success in another election cycle.

The religious right got up in arms about LGBTQ curriculum. This out board member responded.