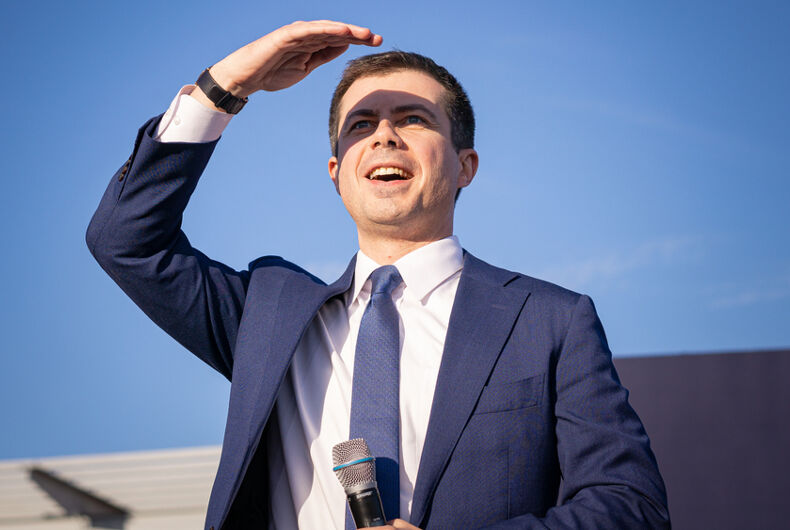 Pete Buttigieg is being criticized for his comment from last night’s Democratic presidential debate in which he said he’s “not looking forward to” a possible election season where Bernie Sanders’ “revolutionary politics of the 1960s” go against “Donald Trump with his nostalgia for the social order of the 1950s.”

Buttigieg said the line as a way to knock Sanders’ recent praise of Cuban dictator Fidel Castro’s progressive social reforms. But after Buttigieg highlighted his own comment in a tweet, critics began pointing out that the revolutionary politics of the 1960s include the Stonewall Uprising that made Buttigieg’s acceptance as an out gay presidential candidate possible. Buttigieg subsequently deleted the tweet.

“The only way you can do [create socially progressive change] is to actually win the presidency. And I am not looking forward to a scenario where it comes down to Donald Trump with his nostalgia for the social order of the 1950s and Bernie Sanders with a nostalgia for the revolutionary politics of the 1960s. This is not about what coups were happening in the 1970s or 80s. This is about the future. This is about 2020. We are not going to survive or succeed and we’re certainly not going to win by reliving the Cold War, and we’re not going to win these critical House and Senate races if people in those races have to explain why the nominee of the Democratic Party is telling people to look at the bright side of the Castro regime. We’ve got to be a lot smarter about this and look to the future.”

But when Buttigieg shared part of his quote (divorced from its debate context) via Twitter, commenters pointed out that the 1960s birthed the Black civil rights movement, second-wave feminism, a potent anti-war movement, and the 1969 Stonewall Uprising which marked the start of the modern LGBTQ rights movement, a movement which Buttigieg has surely benefitted from.

Wow. Bernie organized sit-ins against housing segregation in the 1960s. Buttigieg says we shouldn't have "nostalgia for the revolutionary politics of the 1960s." #DemocraticDebate pic.twitter.com/LM5ggqs3rK

Historian here. Maybe Pete Buttigieg doesn’t know this, but “the revolutionary politics of the 1960s” is what brought us the greatness of Martin Luther King, Jr., Malcolm X, and the height of the civil rights movement.

Buttigieg's dismissal of the social movements of the 1960s is an insult not just to the generation of LGBT people before him whose brave activism paved the way for a world where he could run for president, but to every social minority who dares to imagine a more just world

If the reference is to Cuba, why did he compare the 60's to Trump's supposed nostalgia for the social order of the 1950's?

"Social order of the 1950's" clearly means Eisenhower America, which Buttigieg is which clearly juxtaposing *American* politics of the 1960s.

Viewed charitably, Buttigieg was saying that he doesn’t relish a presidential campaign where down-ballot candidates have to respond to Bernie’s appreciation of Castro and where both the Republican and Democratic candidates are pursuing visions of an old America. After all, politics should respond to the present moment and point towards a brighter future, not re-live the past.

“We deleted the tweet because it did not capture the full context of Pete’s comments, which clearly referred to Bernie Sanders’ nostalgia for the coups and revolutions that were taking place in Cuba and around the world. Pete was making the important point that if Bernie Sanders is the nominee, it will hurt Democrats up and down the ballot if we have to spend our time explaining why our nominee is encouraging people to look at the bright side of the Castro regime.”