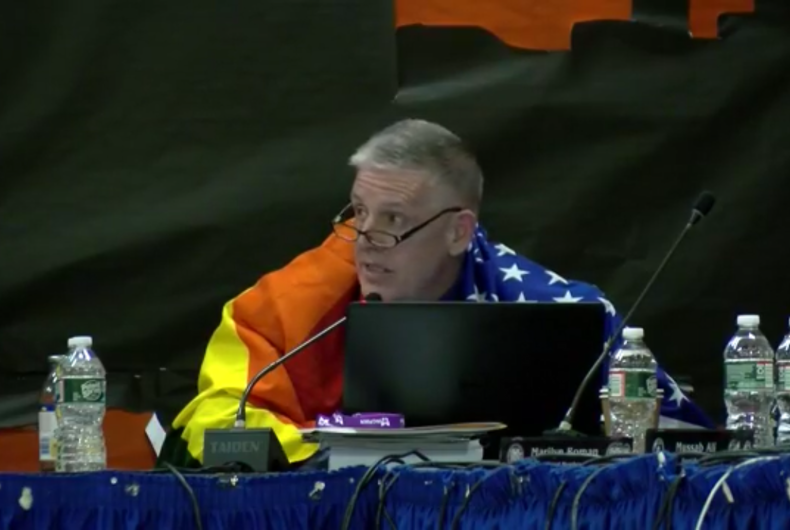 Gerald Lyons is an openly gay member of the Board of Education for Jersey City, New Jersey. He sat and listened to over 3 hours of anti-LGBTQ rhetoric from religious figures while debating the upcoming LGBTQ History curriculum.

“Tonight, members of three religious groups came to the School Board meeting to attack the LGBTQ community,” Lyons later wrote.

He has had to endure several meetings such as this in recent months, even though the subject is mandated by a law that the state passed last year, and is not explicitly related to religion.

For example, a Coptic Christian speaker and a Hasidic Jewish speaker accused LGBTQ people of idolizing ‘a pedophile’ in Harvey Milk, even though he was never accused of such a crime. The Hasidic Jewish speaker, a Mr. Teleki, further claimed that it’s unfair that Jewish hate crimes don’t take priority over LGBTQ history subjects such as Milk, “even though he was a pedophile, and did next to nothing in his career,” he alleged. He then claims that schools should also teach children that the ‘majority of’ HIV and Syphilis infections come from “homosexual activities” to students along with the curriculum.

Another speaker claimed that “Martin Luther King is turning over in his grave that people think this is what he meant he said equality.” He claimed that he, too, had a dream like King’s, that hoped that “kids will be taught that true pride is to control their sexual desires.”

Then came Karin Vanoppen, a Catholic mom. At the board meeting, broadcast live on Facebook, Vanoppen said that religious freedom is not about “going to the Board of Ed, and telling them you’re not allowed to speak on this and that. This is what religious schools are for, not public schools.”

Vanoppen compared the anti-LGBTQ rhetoric to Hitler’s, who led Nazi Germany during the Holocaust that “also included” gay people. She also quoted out soccer star Megan Rapinoe, hoping that “she will be one of the people that will be included in this curriculum.”

Vanoppen then held up a flag combined with both the American stars and Pride stripes while speaking. “I hope my son will remember seeing her, because we went to France and took this flag to cheer [Rapinoe and Team USA] on, and say, ‘great, we won…’ We win because everyone is included.”

This inspired Lyons to respond in a quiet, simple way. The retired high school principal and current college professor asked to borrow “this American rainbow flag…to wear until [the session is closed],” he wrote on Facebook.

Tonight, members of three religious groups came to the School Board meeting to attack the LGBTQ community. I borrowed…

He wore the flag while more religious members spoke about how teaching LGBTQ history would somehow become detrimental to children. Parents threatened to keep their children home if subjected to any curriculum, compared it to teaching about the Palestinian state, and claimed that religion would die if this subject was taught.

When it was the board’s turn to speak, many of their members reminded the speakers (many who left without listening to the other speakers or the board) that while the subject matter has been shaped, the curriculum has not been determined and students will only be taught about LGBTQ people’s role in American history.

Lyons spoke out against the rhetoric promoted by conservative religious figures and the invoking of Dr. King. “We heard arguments that gays want to turn children gay, and that they need to be taught control…Pedophilia and AIDS were brought up to support their arguments.”

“One speaker…said that Dr. King’s message of love for all would not include equal rights for the LGBTQ community. I find it very offensive that this hate monger would use Dr. King to spread his message of hate,” Lyons remarked.

Unfortunately, Lyons was not met with the same respect that he granted the various speakers. While speaking, a Hasidic Jewish person “walked up closer to the board and stared down Lyons” while he spoke, prompting him to stop and ask if the person had an issue. “Do you want to sit back down?” Lyons challenged him. “Did I sit while you were talking spewing your hatred? I did.”

When the person began yelling, Lyons stopped acknowledging him while he spoke “with that voice” and moved on, saying “anyway, I’m continuing.”

It’s unclear if Teleki was the person yelling while Lyons was speaking, but he did later call Lyons a “Nazi pig.”

In the news today. This speaker called me a “Nazi Pig” for standing up for the LGBTQ community. I guess he doesn’t know…

“I really wish people would stop using God’s name to sow hate,” he wrote in a Facebook post after the meeting.

Gov. Phil Murphy signed into law an extension of existing legislation, mandating that “requires boards of education to include instruction, and adopt instructional materials” about LGBTQ people in middle and high schools or “where appropriate.” This expands on the previous law necessitating  the “political, economic, and social contributions” of persons with disabilities, racial minorities, and other marginalized communities are included in school curriculum.

New Jersey is only the second state in the nation after California to legally require LGBTQ history to be taught, and left the specific to be planned by school boards because “The Department of Education sets academic standards, but does not write curriculum.”

See the remarks at the board meeting in its entirety on The Jersey City Board of Education’s Facebook. Lyons’ remarks starts at 3:16:52 in.

Two School Board Meetings with speakers spewing venom and misinformation. The Bayonne School Board is dealing with this…