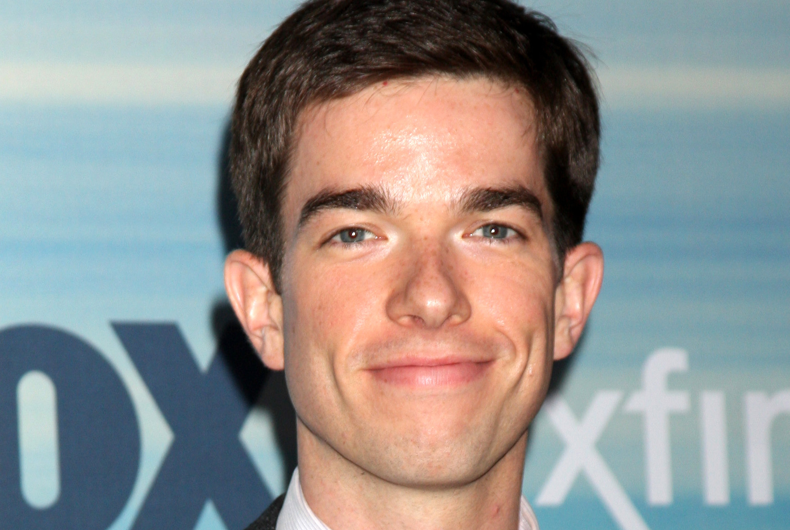 John Mulaney at the FOX Fall Eco-Casino at The Bungalow on September 8, 2014 in Santa Monica, California.Photo: Kathy Hutchins / Shutterstock.com

Actor John Mulaney is hosting Saturday Night Live tonight, the show in which he served as a writer for 6 seasons – and where he became known for co-creating Stefon, a gay nightclub frequenter as played by Bill Hader. He stopped by The Tonight Show in preparation for his third time hosting the show since leaving in 2014.

During his interview with fellow ‘SNL’ alum and Tonight Show host Jimmy Fallon, Mulaney addressed recent comments from Presidential candidate Pete Buttigieg, who said recently that he was “hoping for” Mulaney to play him in a biopic about his life.

“As I accept all movies offered (2 so far),” the comedian joked initially in a tweet, “I accept.”

On the Tonight Show, he talked more about Buttigieg’s comments and the responses he’s gotten since publicly supporting the idea. He reiterated his tweet, saying “I’m hoping for it…I’ve been offered two movies and…I am in both of them. I am hoping for it.”

“I was excited – I think it’s really cool. I’m from the Midwest, and he’s the mayor of South Bend.”

As I accept all movies offered (2 so far) I accept.

“I think I tweeted that, and then people were mad,” he continued, saying that “other Democrats” were the majority of angry commenters. “They were like, ‘How dare you! No, Bad Democrat! Bad Democrat!’ I was like, what happened? and they said, ‘he’s not good enough as a Democrat.’ I said, okay, alright…”

Fallon pointed out that he wouldn’t be supporting the out Presidential candidate by playing him in a movie, to which Mulaney shrugged. “Also, he’s an openly gay veteran of the military,” he continued, “so it’s a real good idea to turn on him violently, other Democrats…” before jokingly muttering under his breath, “stupid idiots.”

Mulaney continued to clarify that he’s not exclusively supporting Buttigieg in the primary election, saying “It’s just like, ugh…people are like, ‘…who do you like, Biden or Buttigieg?’, I’m like, ‘your tone is crazy right now.'”

“I’m just going to vote ‘D’ and walk out of there, even if it’s Garfield,” he concluded in laughter.

Here’s some of the responses under Mulaney’s initial tweet that he may refer to.

I’m a big fan, but I don’t know if you have the cold dead eyes to play an empty suit like Former Mayor Pete.

I love you John but wouldn’t they get Christian Bale to reprise the role? He was so good in the first American Psycho.

See Mulaney talk about the potential gig, and more about his time at Saturday Night Live in the clip below. He starts talking about Buttigieg at approximately 2:28 in.

You can also gear up for John Mulaney’s third time as SNL host by watching these promos.