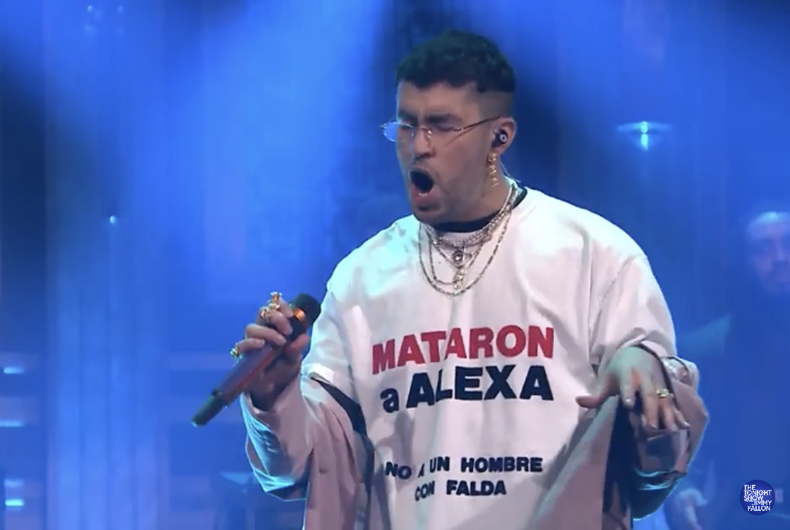 Bad Bunny performing on Jimmy Fallon in a shirt that defends a murdered trans woman in Puerto Rico.Photo: Screenshot via YouTube

Puerto Rican musician Bad Bunny appeared as a guest on The Tonight Show with Jimmy Fallon last night, and also joined Panamanian singer Sech to perform their song “Ignorantes” (“Ignorants”). During his performance, Bad Bunny wore a skirt and a large red blazer. Toward the bridge of the song, he pulled off the blazer to reveal his shirt which read “MATARON a ALEXA… No A Un Hombre Con Falda,” which translates to “THEY KILLED ALEXA…Not a Man in a Skirt.”

The entertainer’s shirt referred to the death of Alexa Negrón Luciano, a 27-year-old transgender woman from Puerto Rico who made international headlines after being found murdered on Sunday, February 23.

Initial reports from Puerto Rican media called Luciano “a man dressed as a woman” and mentioned that she was accused of peeping in a woman’s restroom at a McDonald’s restaurant last week. CBS’ Lead National Correspondent David Begnaud reported that no charges were filed because police found no evidence of Luciano doing so.

Nonetheless, people in the restaurant recorded her and hurled transphobic remarks at her while she ate alone. Luciano’s full name and profile were outed online and no more than 12 hours later, she was fund shot to death in Toa Baja, a city near Puerto Rico’s north-central coast.

Singer @sanbenito performed on @FallonTonight wearing a shirt that reads “THEY KILLED ALEXA NOT A MAN IN A SKIRT.” He did so to draw attention to the death of 27-year-old Alexa Negrón Luciano, a transgender woman who was shot to death on Sunday amid cackles from her assailants. pic.twitter.com/tRWqEdlRiz

A video of the shooting was posted to YouTube, showing the assailants sexually harassing Luciano. When she doesn’t respond to them, they threaten her, saying, “We are going to shoot you up.”

Sure enough, you can hear the people recording the video laughing while shots are being fired. Police confirmed that they believe it is the authentic recorded event of Luciano’s murder.

Even after her death, reports from the island continually misgendered Luciano.

Based on tips, the police believe the suspects are four adolescent teenagers and are currently on the search for them. Police also haven’t located family or next of kin for Alexa, and her body has not yet been claimed.

'Alexa' was a transgender woman killed in Puerto Rico after social media posts accused her of peeping on people in a public bathroom. Police found no proof. The complainant didn't file charges after finding out Alexa was homeless. Despite that a narrative spread on social media. pic.twitter.com/xknfGH7HRD

San Juan mayor and gubernatorial candidate Carmen Yulín Cruz was one of several activists and politicians to call attention to the violence against trans people in Puerto Rico.

“You can feel the pain of… all of us who understand that the lives of our trans people are worth the same as that of any other compatriot,” she tweeted along with a video of activist Pedro Julio Serrano speaking to a radio station about the murder.

Current governor Wanda Vazquez said at a press conference that this was a hate crime and will be treated as such. However, police are not believed to be pursuing it as such.

BREAKING: Puerto Rico Governor @wandavazquezg says all things point to a hate crime regarding the murder of a transgender woman on the island, yesterday. Many people knew her as Alexa. The Governor tweeted this video using the hashtag #HerNameWasAlexa.
pic.twitter.com/k5BZrlUqg8

In a statement, Serrano wrote, “The terrible murder of a trans woman, revealed in a video where she is stalked and hunted, is nothing more than a hate crime motivated by intolerance.”

Serrano called on the authorities to “investigate this murder without prejudice,” asked the media to take on the “responsibility of using correct pronouns and no longer promoting transphobia,” and blamed “fundamentalist groups” for promoting the idea that trans people seek to peep on people in bathrooms.

U.S. Presidential Candidate Elizabeth Warren also expressed how “heartsick for Alexa and her loved ones” she was, explaining how “we must use every tool we have” to end the epidemic of violence against trans women of color.

The hashtag “#SeLlamabaAlexa” (#HerNameWasAlexa) has trended over the last week to speak out against the events around Luciano’s death and investigation.

Bad Bunny’s song “Ignorantes” is about a failed relationship, where the two singers realize they don’t know why they couldn’t stay with their respective romantic partners.